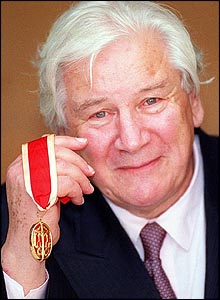 I just loved Peter Ustinov’s sophisticated and erudite goofiness. Now he is gone:

….Sir Peter starred in films such as Spartacus, Death on the Nile and Logan’s Run, as well as many TV shows.

The son of part-Russian parents, Sir Peter was famed as a raconteur and was an ambassador for charity Unicef.

Sir Peter’s agent Steve Kenis told BBC News 24: “He had a breadth of vision of himself and of the world that few people have.

“He was a writer of note. People forget he was twice-nominated by the Writers’ Guild of America for screenplays he wrote.

“Above all he was a great humanitarian. He was a Unicef ambassador and he valued that very highly,” Mr Kenis said.

“When you have the capacity to have an influence on the public, through movies or theatre, it isn’t difficult to have the same experience to solve the humanitarian problem.”

BBC presenter Michael Parkinson said Sir Peter was in his “top five” interviewees of all time, describing him as a “good writer and actor, a wonderful raconteur and as such, God’s gift to the talk show host”.

….Sir Peter was born in London in 1921, after his father, an officer in the Russian Czar’s army, refused to take an oath to the Eastern Orthodox church because he was a Protestant.

Educated at the Westminster School in London, he left at 16 because he hated it, but had almost instant success on the London stage. His first play was staged when he was only 19.

During his time in the army in World War II he was batman to actor David Niven. The pair were to become lifelong friends.

He spent part of the war stationed in Kent at St Margaret’s at Cliffe, and returned there in 2002 to open a village hall.

His acting career lasted more than 60 years, and included Academy Awards for two supporting roles – in 1961 for Spartacus, and in 1965 for Topkapi.

He was also nominated for a best supporting actor Oscar for Quo Vadis in 1951, and best screenplay for 1968’s Hot Millions.

One of his most famous roles was as the Belgian sleuth Hercule Poirot in a number of film adaptations of Agatha Christie’s novels.

Famous for his rich, musical speaking voice, he was also fluent in French, German, Italian, Russian and Spanish, and could also speak Greek and Turkish.

Ah, but they don’t mention three of my favorites: Blackbeard’s Ghost, Viva Max, and his voice role in Disney’s Robin Hood – the fools.