...twenty tracks will give the viewer plenty of chances to experience the creative visuals that have been the hallmarks of Gabriel

One of the most dynamic and exciting live performers of the past twenty years has been Peter Gabriel. Following up on his 2003 DVD release Growing Up Live Warner Strategic Marketing is releasing a new double disc DVD set called Still Growing Up Live And Unwrapped

Disc one will feature performances of some of his best known music including “Red Rain”, “Biko”, “Solsbury Hill”, “Games Without Frontiers” and “Sledgehammer”. Recorded live in smaller and more intimate settings throughout Europe than those we in North America are accustomed to see performances in, this sounds like a unique opportunity to see Peter Gabriel in action. Once again award winning director Hamish Hamilton is behind the controls, and his familiarity with Mr. Gabriel’s work will ensure great visuals accompany the music.

On the second disc, the Unwrapped part, Peter’s daughter Anna has collaborated with Hamish Hamilton to produce an intimate documentary about the performer. It includes behind the scenes footage of the tour, and for the first time ever and extended interview with Mr. Gabriel.

For those of you who may have been ignoring pop music since the 1970’s Peter Gabriel was the creative force behind the British pop band Genesis for seminal albums like “The Lamb Lies Down On Broadway”. His solo career has seen him gain even more accolades with hits like “Solsbury Hill”, “Shock The Monkey” and his stirring anthem for slain South African activist Steven Biko, simply entitled “Biko” 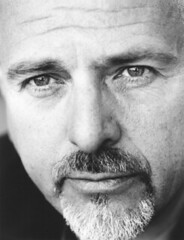 In the early eighties Gabriel gained notoriety for his efforts to promote world music. He was founder of the World Of Music And Dance (WOMAD) festival that featured artists from around the world playing a variety of sounds and music. He was one of the first European artists to tour with a band of including musicians from Africa, and his music reflects the influences these people have had on him.

Aside from the thirteen tracks listed the set feature seven bonus tracks culled from previous tours and from recordings of the band rehearsing for a tour. These twenty tracks will give the viewer plenty of chances to experience the creative visuals that have been the hallmarks of a Gabriel tour since his solo career began.

Growing Up Live And Unwrapped will be available in stores on November 22 2005. Of course for those of you who can’t wait that long and would love a preview the good people at Rhino Records have the usual array of online goodies for you to get some sneak peaks. Along with their usual E-Card there are video excerpts for Windows Media Player in High, Medium, and Low formats; plus QuickTime and RealPlayer feeds as well. Just follow the links below.