It's a fun, cute, little 3D platform game, at least for the first ten minutes.

Dumbow & Cool is far more the former than the latter.

It stars off innocently enough. King Lecture, the big evil head of LLC Oil Rig, the big evil oil company, fires all his workers and attempts to get slave labor in order to turn a net profit.  The oil company goes to where Dumbow and Cool live, Happy Valley, and capture a number of the inhabitants, Shmumps.  Dumbow and Cool's job in the game is to save their fellow islanders.  Also thrown in, as an added necessary task on each level, are a bunch of blue coins for them to get.

Each of the two characters have slightly different special abilities.  Dumbow can throw on a snorkel and mask and swim, whereas Cool can roller skate. Of course, each of these abilities prove essential at different points in the game. 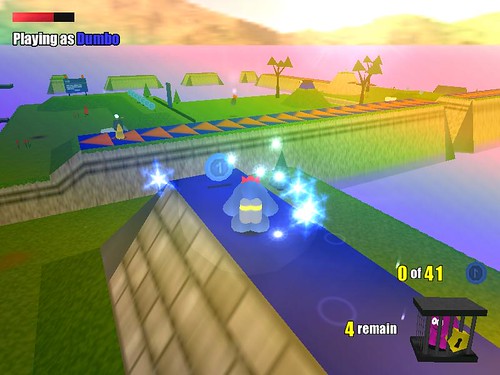 The game itself is a 3D platformer, with simplistic, if annoying, controls.  It starts off fun enough — the first level takes you through, step-by-step, how to control Dumbow and Cool.  The player gets to see how to free the captured Shmumps and get the blue coins.  By the second level, with the controls figured out, the game seems fun — skating, swimming, avoiding the evil Studes, and generally doing good and helping make Happy Valley a better place.

By the fourth level, it all starts to get old.  There are new obstacles and challenges in every level for the player to figure out, but they're either too easy or simply obnoxious.  The control scheme is far too finicky, causing numerous unnecessary deaths of Dumbow and Cool simply due to its awkwardness and overly sensitive nature.  After a few more levels, it's just tedious and annoying. 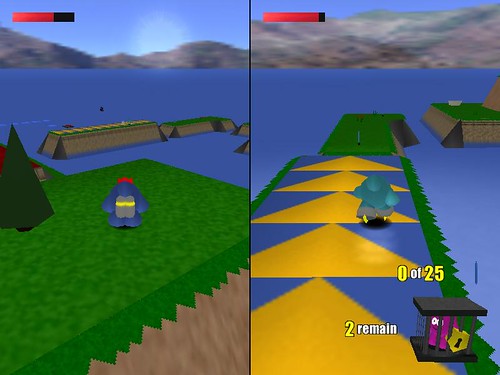 One of the issues that adds to the annoyance factor is after every death, or each time you save, quit, and go back into the game, any Shmumps who had been freed are suddenly back in their cages.  That wouldn't really be a problem, except they still count as having been freed, and should the player try to free them again, Dumbow or Cool just pass right through the Shmump and cage with no effect whatsoever.  It makes it quite difficult to figure out where the player has been and where the player needs to go next.

The entire thing is cute enough, with the cartoonish characters and storyline, and most likely will provide hours of enjoyment for younger players.  In addition to having a one-player mode, it also allows for two players to play on a split screen, and a time attack mode with challenges for both Dumbow and Cool.

For all of its faults — the game is, after all, shareware — it does provide a modicum of enjoyment.  Drewsgames currently sells the full version of the game as a download for a mere $4.99, and at that price it may very well be worth it, bugs and all.

There is no ESRB rating for this game.  All the graphics are cartoony and in no way realistic.  There is a discussion of slaves and some of the characters do shoot guns.