All hail Caesar? I’d certainly give him a “hi” or a “howdy,” maybe even a big old wave or a handshake, but I don’t think I’ll be hailing him anytime soon.

Sure, the game is absolutely great in concept and completely up my alley. Sim-type games, be they of the Rollercoaster Tycoon, Civilization, The Sims, or SimCity variety are my kind of thing. And, Caesar IV has a little bit of all of those in the one box. Sounds pretty enticing.

There are two main types of game play options available: Career and Scenario. In a career, you, as a governor, start out in the boonies with little podunk cities. By accomplishing goals set forth by Caesar himself, you move up to bigger and better cities.

The goals are standard enough for this sort of game: a population of such-and-such size, an entertainment level at a certain point, gain a certain amount of money, etc. This can be played at a couple of different difficulty levels.

In Scenario mode, the point is simply to fulfill the requirements laid forth by Caesar for a single city. In either mode one can continue to play on that city level once the objectives are met.

There is an online mode as well, the connection to which seems flaky at best, and the main thrust of which seems to be allow you to compare your successes at a given scenario to the successes of everyone else playing the same scenario. 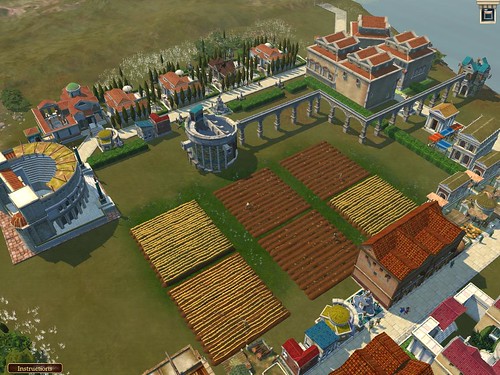 Cities are built in a manner quite similar to a Rollercoaster Tycoon theme park or a SimCity city. Through the addition of various normal city-type places a city can be made to grow.

Cities in Caesar IV need housing for the various types of citizens (Plebians, Equites, and Patricians), a place to grow and harvest food and other essential raw materials, somewhere to turn these raw materials into products, and somewhere to sell the products.

Along the way there are various city improvements that can be purchased so as to make locations more desirable. Fun, right?

In terms of the actual game play, that doesn’t work quite as well as one might hope for. Going down the tutorial track everything starts off easy enough, and the tutorial is slightly behind where one might like it to be. Its explanations seem moderately long-winded and break into game play awkwardly. Still, it’s a bit better to have a game go into slightly too much detail about what the player should do rather than provide too little.

Rapidly, however, the game swings the pendulum far out in the other direction. Oh, the explanations that occur are still a little too in-depth and make game play stumble, but they don’t appear often.

A city can completely fail for what seems like no reason in particular. Everything is hunky-dorey one minute, and then next the Plebians are running for the hills, the Equites making for the next town over, and the Patricians are, well, they’re complaining about the lack of exotic goods and fountain water, even if they’re already overstocked. Damn Patricians, always wanting their plays and shows and exotic goods, no wonder the Roman civilization crumbled eventually.

After much hair pulling, it’s sometimes possible to determine that everything went downhill because a clinic wasn’t positioned in the exact right position causing an infection that did who knows what, or some such similar issue.

Ah, the trials and tribulations of city building. One assumes that, sadly enough, these sorts of minor problems actually affect cities in real life in a major way (thank goodness I am not a city planner, though I do play one in computer games). For the want of a horseshoe nail, the kingdom was lost. 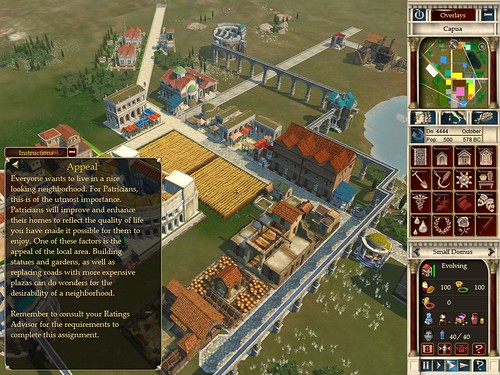 Once these stumbling blocks are overcome, everything seems to level out again. As frustrating as the problems prove to be, overcoming them provides a great sense of accomplishment and makes Rome and Caesar proud. What more could one want?

Well, a set of display screens where the building menus didn’t impede actually building something because the land gets blocked out would be great. While nice looking, and easy to navigate, the building menus do in fact take up a significant parcel of the display and make it very hard to position things correctly. If a tutorial happens to come up on the other side of the screen while you have the menus open, it is virtually impossible to do anything.

Though it is at some points quite a frustrating game, that is not entirely to its discredit. Personally, I’d much rather have a slightly frustrating experience trying to figure out how to do well in a game than to blaze right through with no difficulties whatsoever. There is, of course, a happy medium somewhere in between.

The graphics look nice, much of the game is presented in a not quite top down view (again, similar to a Rollercoaster Tycoon or SimCity), and the sound is more than adequate. It is odd, however, that such a massive amount of graphics power is required to make the game look its best, the improvement in look to the game at a high graphics level is not worth the investment in processing power (except if you have a high-end system and have power to spare).

As the majority of the fun in the game however is not from the sounds and sights so much as the actual constructing of a city and watching a city thrive, it does not greatly hamper the enjoyment to play it at a less visually enhanced state

It’s good, but I’m hoping Caesar V will be better.

Caesar IV is rated E10+ (Everyone 10 and older) by the ESRB for Use of Alcohol and Violence.