Apparently neither love nor a mutual dislike of fur and landmines were enough to keep Paul McCartney, 63, and Heather Mills, 38, together. In a statement on his site, McCartney said the couple had “found it increasingly difficult to maintain a normal relationship with constant intrusion into our private lives,” and that they were going their “separate ways” after four years of marriage.

The statement continues, “Our parting is amicable and both of us still care about each other very much but have found it increasingly difficult to maintain a normal relationship with constant intrusion into our private lives, and we have actively tried to protect the privacy of our child. Separation for any couple is difficult enough, but to have to go through this so publicly, especially with a small daughter, is immensely stressful. We hope, for the sake of our baby daughter, that we will be given some space and time to get through this difficult period.” 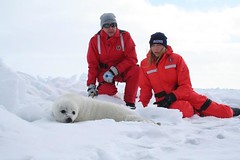 Sir Paul and former model Mills met in 1999 at a charity event for her Heather Mills Health Trust, which recycles prosthetic limbs and campaigns against landmines. Mills lost a leg in 1993 after being hit by a police motorcycle as she crossed a road. The couple married in a lavish shindig at 17th Century Castle Leslie in Glaslough, Ireland in June of 2002 that included coaches, a helicopter, a lakeside dance floor, and leprechauns as ushers – okay, I made the last part up. 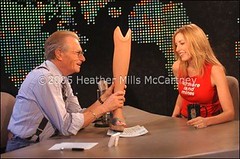 They had a daughter, Beatrice, in 2003. McCartney had three children with his first wife, the former Linda Eastman, to whom he was married from 1969 until her death from breast cancer in 1998. Mary (b. ’69) is a photographer (as was her mother); Stella (’71) is a renowed fashion designer; and James (’77) is a musician.

The failure of this marriage is likely particularly painful and poignant for McCartney, since he was famously deleriously close to Linda – legend has it they only spent one night apart in their entire marriage. I am sure he misses Linda — and John and George, too — terribly.

Paul was reported to have been living on the family farm in Peasmarsh, East Sussex, while Mills was at the couple’s home in Hove. The couple traveled to Canada together in March to document a Canadian seal hunt, of which they disapprove.

In February of last year, McCartney defended his wife against “spiteful, nasty, personal and untrue” stories in the press. He wrote on her website, “It hurts me to see her wounded by these scurrilous reports, and not have anyone to put the record straight … It is true that I colour my hair. Wow, shock horror! I’ve actually been doing this for many years now with varying degrees of success, but it’s my hair, and if you don’t like the result I’m afraid it’s just too bad, but it’s certainly nothing Heather suggested.”

“She was reported to always be clinging to me,” he added, “the inference being that she was too possessive. Never mind the fact that I love her holding my arm, the real truth is that often the surface of a floor or pavement can be dangerous for an amputee to walk on, and a little help from a friend can sometimes be appreciated.”

A litany of accusations against Mills and refutations by McCartney and Mills’ sister/publicist Fiona can be found on her site.