Another month, another Heroes giveaway.

I don't know about you, but I need a hero. I'm holding out for a hero. He's gotta be strong. He's gotta be fast. And, frankly, he's got to be fresh from the fight. Of course, I wouldn't mind it if he was a she. I'd absolutely take a superwoman who'd sweep me off my feet. I'm not picky.

It's precisely because I'm not picky that when a publicist offers to let me run a great giveaway a second time I jump all over the chance. The way I see it, if there are a lot of people out there who didn't get to win a prize the first time a giveaway was offered, maybe they'll be lucky enough to win a second time, and life is full of nothing if not second chances. 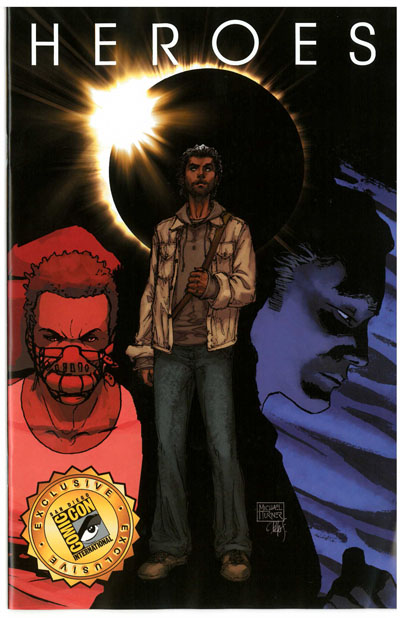 So, while I'm not picky, I am choosy. If someone offers me the opportunity to choose my own hero in some sort of "Create Your Hero" contest to promote the NBC television show Heroes which airs on Monday nights at 9pm, I'm going to jump all over it. There are only two heroes left to choose from. I've made my selection, and I'm not going to bias your thoughts on it, but I absolutely encourage you to choose your own hero now.

Now, choosing your own hero isn't necessary to win our contest (but we do encourage you to take part as it's fun). Our contest is a simple "enter to win" affair, with us giving 10 lucky winners an autographed Heroes comic book each. By whom are they autographed? Tim Kring, the creator of the television series, of course.

Our rules (plus there are some on the entry form's website):