End of the road or just tour fatigue?

Share
Could the strain of 20 years of being tough guys in pancake makeup have been too much for the lads of Poison, or was it just a case of severe road fatigue?

Your trigger could get a might itchy when you spend your adult years simultaneously prancing, preening, and boasting of your manhood. Talk about cognitive dissonance – but hey, every rose has its thorn.

The hard rocking pop-metal Sunset Strip hairballs – nearing the end of a grueling three-month, living-out-of-a bus, 58-show, 20th anniversary summer tour in support of their chock-full-o-chunky-hits Best of Poison: 20 years of Rock collection – took a serious detour off the road to nothing but a good time in Atlanta last Friday night (August 25).

Bassist Bobby Dall and singer Bret Michaels – both clearly wanting action – went at it onstage right before the encore, with the singer throwing his mic at the bassist before Dall slammed his bass into Michaels, injuring his knee. Michaels, incidentally, has suffered from type 1 diabetes since the age of six.

After the altercation, Michaels said to the crowd, "That shit has been building up for 20 years. We are like brothers, and sometimes brothers want to knock the fuck out of each other."

Talk dirty to me, indeed, which, fittingly, was the song the band finished up with after order was restored.

There have been many reported physical altercations over the years between the Poison band mates – who also include C.C. DeVille on guitar and Rikki Rocket on drums – but this is the first onstage since the infamous fisticuffs between Michaels and DeVille at the MTV Video Awards in 1991, precipitated by DeVille's drug-addled non-performance on the show. 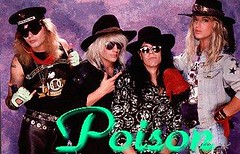 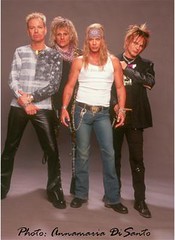 confrontation took place after the performance, not during.

It would appear the band has heeded the words and pictures of encouragement left by fans on their hopping MySpace page, as the glamsters reportedly rocked St. Paul hard last night, and is finishing up the tour as scheduled Thursday in San Juan, Puerto Rico, and Saturday in Monterrey, Mexico.

On top of the tour and their first top 20 album since the early-'90s with the 20 Years of Rock collection, the band is also celebrating the anniversary with the re-release of their first three smash albums – Look What the Cat Dragged In, Open Up and Say…Ahh!, Flesh and Blood – in digitally remastered versions with bonus tracks.