I love El Greco, and the Cleveland Museum of Art houses one of his greatest, “Christ on the Cross,” an epic, vastly empathetic thrust into the gaping maw of a damaged universe, where Bosch meets Van Gogh, Christ’s very human figure pitted against palpably hostile clouds of hatred and despair. We linger in awe over this simultaneously terrifying and triumphant masterpice on every visit to our area’s most hallowed cultural ground. 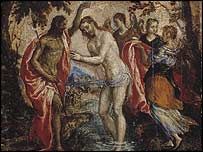 Now the world has another El Greco to embrace and cherish:

El Greco, born in Crete, had a unique style, characterised by elongated forms and bright colours, that inspired 20th Century painters such as Cezanne, Picasso and Jackson Pollock.

The Baptism of Christ measures 23.7cm by 18cm and was found when a man living in a small apartment in western Spain responded to an advertisement offering art valuations, Christie’s said.

“He obviously didn’t realise what he had,” a spokesman said. “It had been in his family since the mid-19th Century and simply been ignored.”

The auction house says it dates from El Greco’s time in Venice, from 1567-70, and is an extremely rare example of his work from that period.

“To discover a painting of such beauty and importance came as a complete surprise,” according to the auctioneers.

“This painting originates from a particularly exciting moment in El Greco’s career, when the artist was still developing what became his distinctive style.”

The news of its discovery comes just a week after another “lost” El Greco work was put on display in Poland. [BBC]

These kinds of stories make me happy – the world is now a little better place.

"Nobody is alone in this world. We all look different and have different lives, but we all live this one human existence," Robyn Bishop-Marin reveals as a takeaway from her solo show.