On the Jackson Front 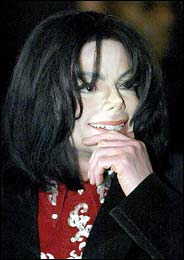 Times are tough for Michael Jackson: a grand jury says he has to stand trial, his career is in limbo, and tawdry details came out about the charges against him.

US broadcaster ABC has revealed details of what it says is a police report on child abuse allegations against entertainer Michael Jackson.
It quotes a psychologist’s interview with the two boys at the centre of the case which has still to go to trial.

Mr Jackson allegedly twice gave one boy so much wine he passed out and then touched him in an “inappropriate manner”, ABC reports.

….He is accused of molesting a boy, who is identified in court papers only as John Doe, between 7 February and 10 March 2003.

Psychologist Stan Katz interviewed the alleged 12-year-old victim and his nine-year-old brother at the request of the family’s lawyer, and the notes were passed to Santa Barbara police for their report.

According to ABC’s revelations on Tuesday, the elder boy, a cancer-sufferer, cried when asked about the alleged molestation and it was mainly the younger brother who gave the psychologist details of what allegedly happened.

According to the leaked report:

*He reportedly touched the boy inappropriately after he had passed out.

*He reportedly surfed the internet on a laptop computer with the boy to find images of naked women and asked him to tell people, if they asked, that they had been watching The Simpsons.

*”Jackson once stood in front of them naked for a moment, as they were watching TV,” Mr Katz was quoted as saying.

*Mr Jackson reportedly played with a mannequin of an 8- or 9-year-old girl in a sexually suggestive manner in front of both boys.

The pop star has dismissed the allegations against him as a “big lie”. [BBC]

On Wednesday a grand jury in California found there was enough evidence to force the singer, 45, to face trial.

Mr Jackson, who is staying in Florida, wrote on his website: “There are helicopters hovering above my residence, reporters staking out, and photographers lurking behind bushes.” He is expected to enter a “not guilty” plea at a court hearing on 30 April.

….I am respectfully requesting that media organisations please respect my privacy and that of my children,” he said.

“I greatly appreciate your cooperation.” [BBC]

MJJsource has learned that there will be a Fan Sponsored & Organized Candlelight Vigil in support of Michael on Thursday, April 29th at 7PM. It will take place at the Neverland Gates on Figueroa Mountain Road. It is requested that fans bring their own candles and be extra careful with them. If you have any questions, please contact Faze at [email protected]

The organizers are also asking the fans to gather at the Court House in Santa Maria no later than 8AM on April 30th. They ask that the fans look out for the truck carrying the support banners, sent from 50 different countries, and give them a hand in displaying them!

Michael is so appreciative of all the love and support of his fans. He is aware of all of their efforts and sends his deepest thanks

The NY Times looks at the career angle:

Since November 2003, when he was first accused of sexually abusing a boy earlier that year at his Neverland ranch north of Santa Barbara, Mr. Jackson has completed several business deals that were in place at the time. They include a CBS entertainment special in January and the release of “Number Ones,” a Sony Music CD of his No. 1 hits.

But several potentially lucrative business deals that were in the offing have since evaporated, and those formerly involved say the arrangements cannot be revived unless Mr. Jackson is cleared of all charges.

“Given all the circumstances, it’s only natural that many deals that were envisioned cannot be executed at this point,” said Ronald Konitzer, one of several former business advisers to Mr. Jackson who have not had access to him since the scandal erupted and Leonard Mohammed, a leader of the Nation of Islam, took charge of Mr. Jackson’s affairs.

….Mr. Konitzer was part of a group that had developed MJ Universe, a 10-year multitiered plan to revive Mr. Jackson’s business empire. The plan would have leveraged his name as a brand to be allied to electronics and high-technology companies like cellphone networks and video entertainment businesses.

The venture also included a plan to create a movie studio with a Canadian investor, a project that has now evaporated, Mr. Jackson’s former advisers said.

Similarly, investors who were looking to ally themselves with Mr. Jackson to buy Sony’s half of a music catalog that he owns with Sony (it includes the Beatles’ work) have distanced themselves. Among the investors, the former advisers said, are foreign business executives, including a group in Bahrain, and Don Hannah, an investor leading a venture capital group based in Arizona.

Charles Koppelman, who manages Mr. Jackson’s music affairs, said Mr. Jackson was continuing to record from Los Angeles, where he now lives. “There are things I’m waiting to hear, some tracks that are done,” he said.

Mr. Jackson’s recording deal with Sony, with which he has had a business relationship since 1975, will end with the release of a boxed set of his music sometime next year, Mr. Koppelman said. Sony Music’s retail Web site, www.sonymusicstore.com, now also offers for sale “The One,” a DVD of Mr. Jackson.

….”The charges on the table here are directly connected to the business challenges,” he said. “But the objective here is to get acquitted in court, period. The objective is not to return to 1984 and be big again. That is not on the table.”

Mark Geragos and Benjamin Brafman have given no reason for the decision but said they “both wished Michael well”.

The singer will now be represented by another well-known criminal defence lawyer, Thomas Mesereau, when he appears in court on Friday.

But they parted company in February, citing “irreconcilable differences”.

The BBC’s Peter Bowes in Los Angeles says Mark Geragos and Benjamin Brafman have a reputation for being the best in the business.

Both lawyers have worked with high-profile entertainers before but they say they will no longer be representing Michael Jackson.

“Based on recent developments and discussions with various persons in the Jackson camp, it became clear that it would be best if Mark and I decided to step down,” Mr Brafman said

Mr Geragos stood for Robert Downey Jr on drugs charges and was thought to have been instrumental in Winona Ryder escaping jail at her high-profile shoplifting trial.

The lawyer has also acted for former US President Bill Clinton’s brother Roger in a drink-drive case, and had kidnap and arson charges dismissed against hip-hop star Nate Dogg. [BBC]

The BBC has a profile of Mesereau:

Mr Mesereau took over the case in November 2002 after Mr Blake’s previous lawyer, Harland Braun, quit over a television interview the actor planned to give.

….”I’m deeply deeply grateful to him. Mr Mesereau saved my life. He saved my daughter’s life. I wish him all the best,” said Robert Blake.

Mr Mesereau’s other high profile clients have included heavyweight boxing champion Mike Tyson, whom he represented during a 2001 criminal investigation, and US newsreader Larry Carroll who was acquitted over charges of fraud.

Mr Mesereau, who studied at Harvard and the London School of Economics, is also recognised for his notable courtroom victories defending clients facing the death penalty in Alabama and Mississippi.

A regular churchgoer, Mr Mesereau volunteered his trial services in the death penalty cases without charge. He also provides free legal advice to the underprivileged at the First A.M.E Church in Los Angeles.

Born in 1950 into a military family in West Point, New York, Mr Mesereau has been widely praised for his forceful courtroom demeanour.

….His diplomatic, yet assertive manner helped him secure bail for Robert Blake last year, leading Los Angeles County Superior Court Judge, Lloyd M Nash, to call him “one of the finest lawyers I have ever seen”.

Former federal prosecutor John Potter, who faced Thomas Mesereau in court in a previous case, told the Los Angeles Times he conveys “a sincere and deep-rooted belief in the innocence of his clients”.