The new belligerent Beyonce in the video for "Run The World (Girls)" piques curiosity, beckons and disturbs.

On Beyonce’s Music Video of “Run The World (Girls)”

I was just thinking of my beautiful, hysteric-in-love, workaholic Beyonce, wondering when she was going to wow me with another awesome video when I stumbled on “Run the World (Girls),” and by the time I sat down to write this I have the tune in my head (in the voice of my four-year-old daughter) and the dance sequences stamped permanently over everything I see (in my daughter’s one-hand-in-the-air-another-on-the-hip interpretation). 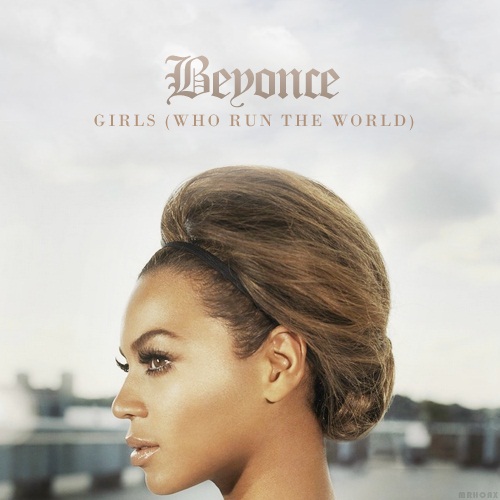 For someone who has been writing on dystopia since 2003, a barren landscape with burned cars, abandoned tires and bike carcasses is a dream come true. And even though we have seen this pseudo post-apocalyptic landscape in Rihanna’s “Hard” and (hints of it) in Britney’s “Till The World Ends,” Francis Lawrence is filming an epic of his own, with horses, bulls, lions and hyenas for company. Smoke is in the air, the sand hits the face, the cars go up on fire. The visuals are stunning but there is a question of balance here; too many images make the eye and the mind scatter whereas in “Diva” one or two arresting shots lingered like footprints on my brain. But maybe I just have a thing for black and white.

Beyonce has always been good at picking outfits that are odd enough to be forward without being unappealing; there are no unintentional laughs or Project Runway arts-and-crafts-slash-hardware-store-tortured concoctions; she knows what she looks good in and she knows how to rock it. I love the Alexander McQueen red dress with her newly blonde locks. The pointy satin bra against the bearskin shoulders, the insanely smooth golden belt and mini bearskin fringe on the Alexander Wang stilettos make the most remarkable visual in recent pop-video fashion. The white Givenchy tulle gown works well with a futuristic take on a retro updo. The Gareth Pugh Agold dress reflects the exploding car behind. The black coat collars up menacingly. The Emilio Pucci yellow dress with an embroidered front and sky-high slits up Beyonce’s thighs is jaw-dropping (other body parts will move upwards). The black unitard with strategically placed cut-outs is stunning and the sequined green number is a show stopper. Should I mention the gold headpiece? I think this is Beyonce at her best dressed.

Some critics have been disappointed by the video’s “simplistic” choreography; they are welcome to do the short sequence the singer performs with the two “male” dancers. Say what now? Out of breath? Those little stunts require great strength and full command of one’s body. They are wonderfully subdued, with perfect concentration on particular body parts, the rest remaining peacefully immobile. The moves are arresting, the native references fresh and the long shots invigorating – Beyonce doesn’t need to lean on frenetic cuts and heavy editing where there is no way of telling whether the person can dance (they can’t, Beyonce can). I love the big third-act dance sequence with the flags in the background (I just wish they weren’t so red; I am from Minsk) and I have to confess chills. It’s “Remember The Time” all over again, only after the world ended.

Pop divas deal with profanity differently, and we have earlier seen Keri Hilson paraphrasing herself on the clean track (very lame) and Mariah Carey euphemizing gracefully (classy). In “Telephone” Beyonce wasn’t as shy as here; then she could blame everything on that Gaga person. My position is this: if you can’t say it, don’t say it at all. But that’s just me.

Beyonce plays her H.B.I.C. card again. Survivor. Independent Woman. Single Lady. I have nothing against that, but:

Money? Not a problem. But I still get paid less than men for all the wrong reasons (obviously I can find something hard to land on, and after that, the slot that spits out rustling reward notes, so why pay me more?).

Babies? I won’t argue that pushing a new human being down my birth canal is probably the most empowering thing I have done, and both Christina and Kelis have noted as much with their superpower chick albums, but the reality is not so haute couture: the only badges of honor I’ve got are my stretchmarks and the only war zone I strategize in is my messy home, plus there is a nine-to-five to sit through (and thank God for that). Then again, I can comfort myself thinking that fishing for a seat for my child in the metro is a noble battle. I am prepared to lose.

Endless power? Not where I come from. I was at the oncologist once, and the guy asked me to slide my t-shirt lower, then lower, then… (I walked in thinking, “I don’t wanna die;” I walked out thinking completely the opposite). Where is this endless power exactly and why does a powerful woman need a pair of garters to feel that way? The men in the video are dressed (typical); the women – not so much. Is Beyonce creating another stereotype while fighting the old one? Stilettos are a great case in point: they are good for kicking crotches or pushing eyes out of sockets; they are even good for running the world. But isn’t there some serious running to be done in a dystopian setting? And isn’t there also sand, Beyonce?

“You’d do anything for me!” I hate to break it to Beyonce, but this rhetoric is bull. What this “new” woman has to offer, her man can get anywhere else. 242 dancers just in “Run the World (Girls)” (real women with real bodies, thumbs up); I think he’d like at least two or three of them (with the pill we can go five, baby)? I have a feeling someone needs to sit through Tigerwoodsology 101 all over again.

Last but not least: What is a girl exactly? What is a boy exactly? Can a concept of man vs. woman warfare be taken seriously by anybody but a preschooler these days? Why are there two male dancers on Beyonce’s side? Do they indentify as girls who run the world despite their protruding genitalia? I will say no more.

Beyonce has a few. I have seen the survivor, the kitty cat, the psycho-Stepford wife; then there was Sasha Fierce, of course. They are different, they have different tastes (Beyonce looks up to Coldplay and Adele while Sasha obsesses over Michel Jackson and Prince). But all these women had a great neurotic streak to them, a beautiful vulnerability; they were cracked in the middle, sometimes triumphant, sometimes defeated. “Why Don’t You Love Me” was a nervous breakdown of a song. “Ring The Alarm” had dimension and depth. I have a feeling with “Run The World (Girls)” Beyonce is introducing a new type of woman. Visually she is a warrior woman, strong, tireless, powerful. There is no weakness in sight, no humour, no healthy self-reflection. I don’t know if that woman has lost all grasp of reality; such one-dimensionality and flatness are disheartening. There is a sense of triumph closer to the end of the video, a sense of unity. Both are bullshit.

The woman I want to see – and I feel no one represents – is strong and powerful and tireless, but only because she has lost everything she was afraid to lose. I want a female hero who resents the hero label, who is crushed under its weight. She runs the world, but she is perpetually bored. She has endless power but is tired of needing to execute it. She is tired of being strong, or of pretending to be strong. She can do what men do, but does she really want to? She looks great in stilettos and a tight dress; she is forced to wear runners and jeans. Beyonce is not delivering that, thus steering clear of problematizing her agenda in any way. Instead, she goes for the obligatory shock factor with a bunch of shallow symbols that stand for nothing but themselves.

Lady Gaga said once that whether the response to her music is negative or positive, it’s good to have response; she is afraid to produce a song that causes no reaction. In a sense, this is a short summary of modern culture. Such a philosophy cancels the importance of a core idea behind a work of art. Because when you do have an idea, a clear vision, negative response crushes you; your vision equals your world. Those who agree are your soul mates; those who don’t are your enemies. And if you don’t want to fight them till your last breath, you are a whore. Beyonce definitely struggles to take a risk in “Run The World (Girls)” while playing it relatively safe, since all of the risks with licking fingers and leg spreading are as ancient as sex itself. Like Gaga, she is desperate for a reaction. But where is the vision? With a vision, everything is a symbol. What about the saliva-dripping hyenas? What do they represent? Exactly nothing. They just make an edgy image.

When my daughter wants a new toy, I tell her to concentrate not on what she doesn’t have, but on what she does. So that’s exactly what I will do: “Run the World (Girls)” has style, catchy lines, flashy visuals, urgency and edge. It has breathtaking choreography sequences. It’s perfect entertainment. 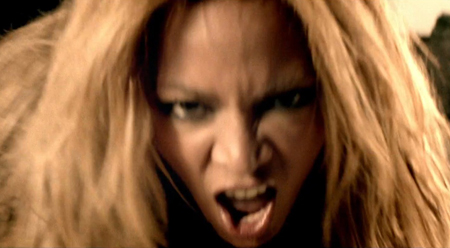 Besides that, I have a feeling Beyonce is introducing another alter ego of hers. (Whether it is fashioned to further disguise who she is as a person or to reveal that, on the contrary, is unclear. Some complain no one knows who the real Beyonce is. There is no need for that. She is an artist. She should be judged as an artist; for dirt, there is reality TV and the neighbours. If anything, I think it’s a smart move, and I love me another doll to play with.) The best glimpse of that woman is in the shot with her vein popping, her mouth askew, her eyes hard. It looks like she is ready to puke Sartre’s nausea of the world, Danny Boyle Infected style. This woman is something different, and maybe Beyonce hasn’t noticed her yet, but she is already out there. This woman is about to snap, transform, mutate; she has the blackness of Joanna Eberhart’s doll double in her eyes. Beyonce hinted at her before (the mannequins in “Diva”) and her face is a glimpse into the darkness to come amidst this colorful, female (chauvinist) jingoism fest.

This is a perfect video to watch when I am feeling down; when there is a strange man in the lift and I have to take the stairs; when there is a phone call that takes me instantly back to a place I’d never wanted to revisit. The new woman is the woman who can give me confidence, however false. The catch is for me to remember that were I to wake up in a post-apocalyptic dystopia I would not be making money writing opinionated reviews on pop songs and horror movies; I would be doing something much more ancient and basic. And believe me, my child wouldn’t go hungry. As long as I know that, “Run the World (Girls)” works just fine for me.

"I thought by playing Titania that I might get a rest in this one, actually sit in my fairy kingdom, and tell people what to do."