The oak tree is a symbol of strength and endurance.

Oak Trees: A Link To The Past

I have a couple of tattoos that circumvent my forearms. On each arm are two stylized dragon's heads accompanied by leaves of a specific tree; the left arm has holly leaves, the right acorns and a solitary oak leaf. In the old beliefs of the British Isles, long before the Romans came, it is thought that the year was divided up amongst the reigns of two kings: The Oak King and The Holly King.

One king represented the period of growth and fertility and the other the period when the land was cold and sterile. Symbolically they can be interpreted, in probably a million ways, but I like to think of them as representing the two halves of the creative process: a period of dormancy for introspection and a period of fertile creativity.

While the holly tree has been retained in our modern celebration of Christmas as a nod to the pagan past, the oak was not granted the same leniency. Since so many of the pre-Christian rituals involved sacred groves of oak trees, the church had many groves of oak destroyed in an attempt to eradicate the practices of its predecessor.

While the oak may not have the ritual significance it once did, its effect on people cannot be denied. Who can truthfully say that they have not been moved by the sight of an oak standing solitary sentinel in some farmer's field? Why is it that even to this day we are moved by stories of oak trees, and that some individual specimens have even come to enjoy a mythic status beyond what would normally be associated with a tree? 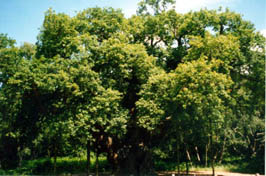 In England, just outside the town of Nottingham lies arguably one of the most famous forests in the English-speaking world, Sherwood. Within Sherwood Forest is a venerable old tree that is referred to as "Robin's Oak", in reference to the forest's most infamous inhabitant.

That both Robin Hood and the tree existed is true enough, but the tree's reputation for being his hideout in the woods unfortunately does not stand up to close examination. Although the tree is currently hollow enough for people to move around inside and even take shelter, it is at most only a thousand years old.

So even if "Robin's Oak" was around at the same time as the outlaw, it would have been a mere hundred year old sapling, living and vibrant. Remember, hollowness is a sign of age and death in a tree, not a convenience for human's to take shelter. If the tree had been dying in the 1100s, it would long ago have turned to mulch on the floor of Sherwood Forest. 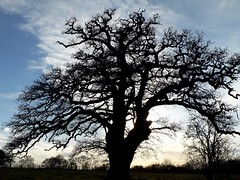 In the grounds surrounding Windsor Castle, Windsor Park, in the Thames Valley outside of London, stands a solitary oak tree of equal if not greater years than its counterpart in the North. It is known simply as Herne's Oak, although there is nothing simple about Herne The Hunter and the Wild Hunt that he leads across the skies on the eve of the Twelfth Night of midwinter. Herne has the body of a man, the beak of an owl, the antlers of a stag, and the ears of a wolf, and he rides on the back of a white horse accompanied by his pack of white-skinned, red-eyed Yell Hounds.

Twelfth night used to mark the turning of the year for the peoples of England. Twelve days prior had been Midwinter, marking the return of the Sun after the longest period of darkness in the running of the year, the twenty-first of December. On the eve of Twelfth Night, the Wild Hunt was said to ride the skies looking for prey, which meant anyone foolish enough to be out on that evening. Farmers would make sure that all livestock was safely in on that night or they could awake the next morning and find themselves short a few head of cattle or sheep.

Herne was a force of nature, answerable to no one save himself, and was said to reside in the oak tree in Windsor Park. He would serve as a reminder to the people that nature is impartial to them, their needs, and desires, doing what it must when it must. Although the longest night of the year may have passed, the worst of winter could still be yet to come.

I was reminded of oak trees again today when reading through the morning paper full of war and horror, I came across this one article in The Globe and Mail about one an older oak tree in Canada and what steps were being taken to preserve it. 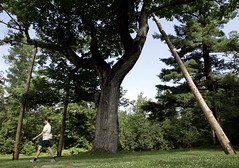 About one hundred kilometres (80 miles) outside of Montreal in Montebello, Quebec is the former residence of Louis–Joseph Papineau. Papineau was the leader of an uprising in 1837 in Lower Canada (Quebec) that demanded representational government for the colonies. Upper (Ontario) and Lower Canada were ruled by an appointed Governor General and a few wealthy individuals. Due to their nepotistic nature they were known derisively as The Family Compact.

Papineau's attempt at change was a failure and he and other leaders were forced to flee to the Untied States where they spent ten or so year in exile. When he returned to Quebec in 1845 he set to establishing his home in Montebello and it was while having the lands cleared for its building that he preserved this solitary oak to give his home a sense of history.

Today, 170 years later, the tree is beginning to suffer from symptoms of old age and is in need of assistance. Parks Canada (the supervisors of all national parks and historical sites in Canada) sought out the help of an arborist to try and devise a means of preserving the three-hundred plus year-old tree.

Today, just like some of its older relatives in Europe, the Papineau Oak is on crutches. Three props, one ten meters and two six meters, are now being used to help support the weight of the lower branches. Parks Canada is hopeful that this will be sufficient to ensure that the tree outlives the rest of us.

Near the beginning of this post I wondered what it is about oak trees that makes them appeal to so many people. While some, like me, have specific reasons for being attracted to oak trees, I think the fact that they are so old gives them a certain romantic appeal. You can stand in Sherwood Forest and say Robin Hood walked by that tree. Or you can visit The Chapel Oak of Allouville-Bellefosse in Normandy, France that is two chapels built inside the hollow core of a nearly 800-year-old tree and think of the pilgrims over the years who have worshiped in the shrine.

In this highly impermanent world that we are living in now, the oak tree is a sign of strength and endurance in the face of all that the world and nature has to throw against it. Perhaps we look to it as an example to help us carry on in the face of so much strife. Or maybe it's just because they make such nice places to have picnics under, with lots of shade.

Either way, oak trees have endured over the centuries, and continue to fascinate and amaze us. They may not be part of any organized religion, but that doesn't seem to have stopped us from doing them honour.