We just keep pumping out giveaways. You know you love us.

Would you like a little nip?  Maybe a tiny tuck?  Really?  You want both a nip and a tuck?  Okay, how about a Nip/Tuck?

Oh.  You want a Troy and a McNamara.

Well, we at Blogcritics Magazine try to accede to the wishes of our readers.  Now, you should know that Troy and McNamara are just characters in a show, so "getting them" is difficult.  The characters portrayed by Julian McMahon and Dylan Walsh respectively.  Frankly, I don't know if they'll stop on the street if you refer to them as either Troy or McNamara (again, respectively).  What I do know is that they don't sign things as Troy or McNamara (yup, that's right, respectively).

The wise among you will ask how, precisely, I know this.  That's a good questio 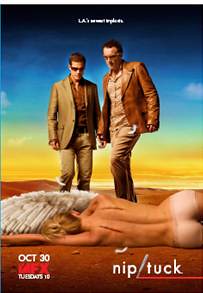 n.  Nay, that's a great question.  I know this because I have to give away, with the help of those nice folks over at FX (the network on which Nip/Tuck airs) and McMahon and Walsh (respectively) a signed Nip/Tuck poster.  The last names of the signatures do not read "Troy" or "McNamara" they read "McMahon" and "Walsh," hence I know that McMahon and Walsh sign things as such, not as Troy or McNamara (respectively).

Put another way, Blogcritics Magazine is giving away a single signed Nip/Tuck poster.  Yes, it's true, we're that awesome.  Just check out what the picture to the right to see what the poster looked like before it got signed.  Now, close your eyes and imagine how fantastic that poster looks with the signatures.

For those not in the loop, Nip/Tuck airs on FX, and the new season starts Tuesday October 30 at 10PM.