American Idol homage on The Fairly OddParents a big hit.

You know you’ve wormed your way into the cultural zeitgeist when you are given an homage in a cartoon. Over the weekend, Nickelodeon debuted a special one-hour episode of their whimsical hit The Fairly OddParents (as in “fairy godparents” for the uninitiated), entitled “Fairy Idol”; an elaborately plotted affair revolving around a Fairy World version of American Idol, which — not coincidentally — sees its season climax tonight and tomorrow with a head-to-head sing-off between finalists Taylor Hicks and Katharine McPhee for the crown. 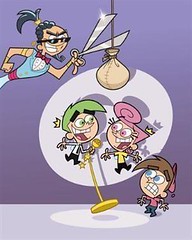 In “Fairy Idol,” jaunty but vile Norm the Genie (who sounds suspiciously like Norm MacDonald, but is not) is fed up with being a genie and decides the fairy godparent thang is a much more rewarding way to pass the millennia.

He makes an evil clone of young Timmy, who treats Cosmo and Wanda — the real Timmy’s fairy godparents, the trio are stars of the series — so badly they quit, opening up the position. Norm then enters the “Fairy Idol” singing competition, where every wish-granting creature (Cupid, April Fool, Lawn Gnomes, Tooth Fairy, William Hung, etc) in the universe has the chance to audition to fill the next fairy godparent opening.

Contestants sing their hearts out and Norm, Cosmo and Wanda (gimme the wand, dammit) are chosen as finalists. There is drama and intrigue galore, as well as a larger than normal role for Chester — whose abundant good will nearly causes the end of life on earth as we know it — and a smoking hot number performed by Cosmo (voice sung by American Idol season 3 runner-up Diana DeGarmo) and Wanda.

“I think the reality TV phenomenon has taken on a life of its own and I wanted to do a special episode that would have fun with the genre,” said Butch Hartman, creator and executive producer of The Fairly OddParents and Danny Phantom. American Idol is a reality show that my kids relate to and is popular with kids everywhere.”

Well, yes – and Hartman’s tie-in show didn’t do badly either, drawing a total of 5 million viewers and more than 3 million kids for Friday’s debut. It was all of television’s number-one program for the day among kids 2-14. Additionally, the special generated 4.6 million streams on TurboNick, Nickelodeon’s broadband video service; and four million game plays on Nick.com with the “Fairly Idol: Fast Fame!” game.

We’ve said it before: Nick knows how to promote, and now they’ve got the vaunted cross-platform thing firing on all cylinders. Good thing they aren’t evil.