Can you tell Karen O from the look-a-likes in this video?

Wanting to get their fans involved in their newest video project, the Yeah Yeah Yeahs put the call out via their website — and the fans answered. The band asked fans to record themselves lip-syncing to the new song, "Cheated Hearts" and the response garnered them over 100 submissions.

The band then whittled it down to their favorite 25 look-a-likes, and the video was born. Released July 12 on their website and Yahoo Music, the video includes a varied mix of styles. Some fans went for the literal, shooting for the best impersonation they could, while others got creative and artistic. 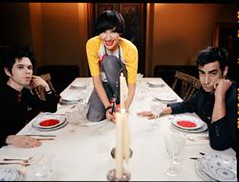 On the unique video and the fan reaction, drummer Brian Chase says, “The best part of watching the entries was seeing someone’s ideas of the song and of us filtered through who that person is and how they feel about the music.”

"Cheated Hearts" comes from the alternative rock band's second album Show Your Bones which is a follow up to their self-titled first release (sometimes referred to as the Master EP). Based in New York City, the Yeah Yeah Yeahs consist of vocalist Karen O., drummer Brian Chase, guitar player Nick Zinner, and second guitarist Imaad Wasif.

The band formed in 2000 and in six short years has acquired quite a list of accomplishments including two CDs, a U.K. tour, an appearance as South by Southwest and supporting tours with such bands as Girls Against Boys, The Strokes, and the White Stripes. The band credits the fans for taking them this far and views the video as an acknowledgement and a thank you for their support. Karen O commented, “It ruled to mix it up with them and get them in our video. They are so bigger than the sound!”