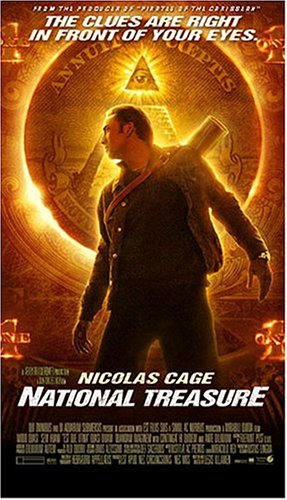 Wow – that’s the most ripping trailer (WM) (Real) (QuickTime) I’ve seen in a long time. My heart is pounding, my eyes twitching, my imagination fired (I’ve GOT to get into PR one of these days).

I’m not kidding, National Treasure, with a swashbuckling yet deadpan Nicolas Cage (is he the new Harrison Ford?), looks to be an update of the Raiders series with the panache of Pirates of the Caribbean (same producer), and the precision-caper angle of Ocean’s Eleven or Mission Impossible.

The plot (below) reads much more plodding and convoluted than it seems to be in the trailer, and if you really want to get into it, check out the movie site for an amazing SmartTrailer, which after showing the trailer proper allows you to select from nine special features delving into such subject as “The Treasure Is Real” “Templar Knights” “Masons” “Ben Franklin” and “Declaration of Independence,” with audio-visual background, history, clips, interviews on the topics. It’s like a DVD on the Internet.

Nicolas Cage stars as Ben Franklin Gates, an archaeologist and adventurer looking for the legendary lost treasure of the Templar Knights, spurred on by the stories he was told as a young man by his grandfather, John Adams Gates, twenty years before. John tells Ben the secret hiding place for the treasure is encoded on the back of the Declaration of Independence, placed there by none other than the founders of the United States of America, George Washington, Thomas Jefferson, and Benjamin Franklin.

Ben’s father, Patrick Henry Gates, is more than well aware that treasure hunting has been the curse of the Gates family, and has soured on the entire idea. With the help of his best friend and partner in crime, a sarcastic, thrill seeking computer expert named Riley Poole (Justin Bartha), Ben and his team careen from one grave predicament to another. As an adult, Ben is contacted by Ian Howe (Sean Bean), a rich British adventurer who also dreams of finding the lost treasure.

When Ben learns Howe’s intentions for the treasure are less than the best, Ben comes into contact with Dr. Abigail Chase (Diane Kruger), a pretty and young researcher involved in the preservation and display of the Declaration of Independence. At first, Abigail is skeptical of Ben and his wild stories. But when Howe and his henchmen break into the National Archives, Abigail starts to believe. Taking the Declaration to Ben, Abigail becomes a partner in this crazy scheme, as they try to outwit Howe, as well as a team of FBI Special Agents, lead by Agent Sadusky, charged with getting the Declaration back.