The fact that I, or anybody else for that matter, write at all is pretty darn special.

Yesterday afternoon marked the first official day of being able to register one’s winning word count with the folk at NaNoWriMo. After carefully transferring all existing chapter documents into one massive .txt file as required I hit the upload button.

Even though I knew I was well beyond the 50,000-word mark there was still the usual trepidations: what if my software is some sort of bugged version that counted every word six times? Could I survive the disappointment of seeing my assumed winning entry be relegated to “sorry not done status”?

Of course those were needless worries, as after my computer chatted with their server for what seemed an endless time (probably all of thirty seconds) up popped the winner’s page. I’m now officially a proud finisher of the 2005 National Novel Writing Month competition. For my troubles I receive a lovely printable certificate, a couple of Icons that I can proudly display on my blog site, and the supposed happy feeling associated with a job well done. 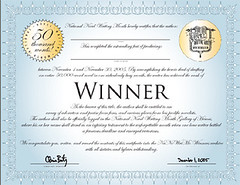 Well as the man says that and a quarter will get you a phone call. As of yesterday there were nine pages of wining authors already posted on the official NaNoWriMo site, some with word counts over 100,000. It’s hard to feel unique when you see that many people already registered within the first two hours of the verification program being initiated.

Sure I’m supposed to be filled with a feeling of self-satisfaction and the knowledge that I completed what I set out to do, but in reality what have I done? I have 71,000 words of a first draft of a novel of who knows what quality. I feel like I’m just starting something, not finishing.

Way back at the beginning of the process I was all excited about the prospect of writing 50,000 words. I knew it wouldn’t be enough to be called a novel but it felt like it would be enough that I would be able to see the end of the road. Instead I find myself, at best slightly over half done a first draft that will need serious editing and rewriting before I would even dream of submitting it to a publisher.

Does that sound a little self-pitying? Yeah well I guess it does but I had hopped to feel a little more excited about reaching this point. Perhaps because I had hit the 50,000-word mark so early this day was anti-climatic and it’s just a natural let down. But what did I expect? Did I actually think I would feel like a different person because I had done this?

Maybe that’s it; I had supposed some magic wand would wave wondrously over my head marking me with the sign of the novelist once I had passed the finish line. There would be some sort of distinctive glow about me that would cause people to say: “Look at him he wrote 50,000 words in a month, he’s a real writer”. Or if not other people at least I would feel that way.

But I still feel like the same person. Than again what’s a “real” writer supposed to feel like? Maybe I already “feel” like one. I preoccupy with words, I worry about how to best say something in print, I get withdrawal symptoms if I can’t sit at my laptop twice a day and write, I plan every day around my writing schedule, and I resent any and everything that gets in my way.

I fall asleep thinking about when I need to wake up the next morning so that I can at least get something done, even if it’s just a few hundred words in the morning. I wake up wondering if I’m going to feel well enough to accomplish what I’d like to today. I negotiate deals with the housework, promising the dishes I’ll clean them after I’ve finished this paragraph.

In short, now that I think about it, my whole life revolves around a little grey box about 20 inches by 20 inches in size that allows me to do this thing called writing. But since I was pretty much doing that before the beginning of November anyway, perhaps the reason I don’t feel any different, was there was nothing left for me to change into?

Somewhere else along the way, without me noticing it, I had made the transformation from whatever it was I had been before to being a writer. Could it be that it was always latent within me, and I’m just now stepping out of the closet and saying look at me I’m a writer? (Do we get a parade: march down the street wearing rejection notices yelling slogans like: “Fight For The Right To Write”)

Getting hung up on the whole mystique of being a “novelist” is the problem. Somehow I’ve confused being a novelist and being a writer. A novelist is only one type of writer, although it has a certain cachet to it that other writing may lack, it shouldn’t preclude other forms of literary expression (I foresee problems with the parade: will the novelists march with the poets, and the poets with the journalists, and what about those weird hybrids known as bloggers. It could get messy) from being considered writing.

It’s like when I used to be an actor. I spent my whole career working with pretty much one company, so very few people outside of school children would have seen me on stage. Invariably when people would ask what you did, and you would reply actor, their first question would be: “Would I have seen you in anything?” As if that’s what would validate you in their minds.

Is it only the arts that have that problem? Does anyone ever ask a dentist or a lawyer a similar type of question? Oh whose mouths have you done? Have I seen you on courtroom television? But people have no problems asking writers what books they’ve published, painters where their work is displayed, actors what movies they’ve done, and so on.

In other words I should have known better than to fall into that trap, but I obviously did, not respecting others or myself for the work we did because it wasn’t the almighty novel. The fact that I, or anybody else for that matter, write at all is pretty darn special. It’s not what you write, it’s that you write that should matter, but I let that slip away from me in the allure of working on “The Novel”

So where does that leave me at the end of a month of pounding away at a keyboard and a little bit of soul searching? That no matter what happens with this thing that I began on November 1st I am still a writer. I didn’t feel any different on November 25th because I wasn’t any different.

What I write doesn’t change who I am or what I do. Yes it would be great to have this work turn out to be something that a publisher will decide to set loose upon the world. To be able to call myself a novelist as well as a writer would be wonderful, and I cannot deny that has always been my goal and my dream since I started writing.

So I will finish what I’ve started and I will do all the rewrites that I can. I will send chapters off to publishers and wait to here what they have to say. However I now know that no matter what happens I am a writer even if I end up not being a novelist.

For that realization, if nothing else I will be forever grateful to the National Novel Writing Month Competition.