Though Bahamian authorities finally issued a death certificate for Anna Nicole Smith’s 20-year-old son Daniel yesterday, mercifully allowing her to proceed with funeral arrangements, mystery and controversy still swirl around his sudden death in her hospital room on September 10, where he was visiting in celebration of the birth of her daughter three days earlier.

The cause of death was left “pending chemical analysis” upon the cert, a painfully open-ended situation for the statuesque blonde icon, who had repaired to the Caribbean nation to escape the prying eyes of the media after she became, to use her phrase, “pregnated.” 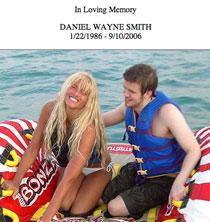 Smith privately brought in pathologist-to-the-stars Dr. Cyril Wecht (Elvis, JonBenet) to perform a second autopsy on her son, the results of which will not be available until next week. But in reviewing initial findings from the tests performed by the local coroner, Wecht said the antidepressant Lexapro was found in the young man’s system, “but probably not enough of it to kill him,” he told the New York Post.

Smith had reportedly been depressed for several weeks over a girl.

“If it was 10 times as high [the level of Lexapro in Smith’s body] … it might be considered a contributing factor,” Wecht said. But he added, “It’s not a close call … nowhere near a toxic range.” The sleeping medication Ambien was also found in Smith’s system, but again at low, “therapeutic,” levels.

Wecht also said that initial tests ruled out “everything … in the major category of drugs. They tested for tranquillizers, barbiturates, opiates.” 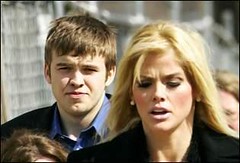 The 75-year-old pathologist indicated that Daniel Smith had been treated for an elevated heart rate about six weeks ago, and he was still waiting to see doctors’ notes. “If drugs are not the answer, then it’s most likely his heart,” Wecht told the Post.

The Smith tragedy and attendant turmoil has also caused considerable static in the normally quaintly genteel Bahamian groove. “Her Majesty’s Coroner” Linda P. Virgill was roundly criticized from various camps for both the style and substance of her performance last week when she rather dramatically labeled Daniel’s death “suspicious,” and grandly declared that she already knew what had killed him — though she wasn’t telling — even though toxicology results were not yet in.

Smith’s local attorney Michael Scott belittled Virgill, asking, “Unless she’s psychic or God, unless the pathologists know the cause of death, how does she?”

But Virgill was also criticized for offering celebrity Smith “preferential treatment” when she scheduled an inquest just three days after her son’s death – despite a large backlog of other cases.

In fact, Wednesday Chief Magistrate Roger Gomez announced that not only had Virgill been taken off the Smith case for “some remarks she made in the press,” but that the entire system for medical inquests was being overhauled in direct response to citizen complaints.

Gomez said that “angry Bahamians” had objected loudly to having Smith’s inquest scheduled so quickly (for October 23) while some had been waiting for years just to get a hearing date scheduled, and others “had … been given dates for their cases a couple years ago [but] are still waiting to have a hearing,” he told the local Nassau Guardian.

The magistrate added that the October 23 inquest would be canceled if tests show that Smith died of natural causes.

In a huffy editorial published today, the Guardian explained the change in the inquest system before rejecting it. “With just a memo from the Chief Justice and no warning, the specialist Coroner’s Court [i.e. Virgill] has been discontinued, with the system reverting to what it was more than a decade ago, adding the inquests into suspicious and questionable deaths to the already overburdened Magistrates’ Courts,” the editors write.

“The fact that some people may have complained about the date set for the Daniel Smith inquest is a poor excuse indeed for the dismantling of a working Coroner’s Court system,” they continue. “If Coroner Linda Virgill was at fault in moving the Smith inquest to the head of the line, then say an error in judgment was made and set a new and reasonable time. That should not be the basis for scrapping a system that is needed and was seen to be working,” they argue.

Pedro Ferguson, president of the Bahamas Funeral Directors and Embalmers Association, told the paper his group was “disappointed that we have to go back to the old system.”

Man, knee-jerk political reaction is the same the world over.

In more local politics, Smith was granted permanent residency in the Bahamas this week by immigration minister Shane Gibson, just three months after applying for it, causing even more wounded ejaculations of “favoritism” from those predisposed to do so. In an interview with the Guardian, Gibson said, “We are inviting foreigners to invest 500 thousand dollars in a home and once [they] do it [they] are qualified for permanent residency. What is the problem with doing it as quickly as possible?” he asked not unreasonably.

The minister also confirmed rumors that he was on friendly terms with Anna Nicole Smith, and added that visiting her in the hospital in her “moment of duress” was exactly what a friend would do under the circumstances.

“That is how we sell the Bahamas – with a personal touch,” said Mr. Gibson. “People want to come here because of the friendly nature of Bahamian people.” 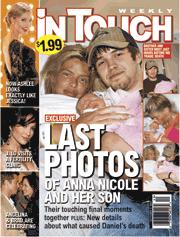 Meanwhile, the former exotic dancer, model, 1993 Playboy Playmate of the Year, actress, reality TV star, and diet pill pitchwoman sold the rights to photos of herself, her new daughter — reported to be named Hannah — and Daniel shot in the her hospital room the night before his death to In Touch Weekly for somewhere between $400,000 and $600,000 in a bidding war.

In Touch executive editor Dan Wakeford said, “We purchased the photos, beating the competition. The photos were extremely emotive, and our readers are incredibly intrigued by this story.”

Daniel Smith was born to Anna Nicole and Bill Smith in 1986, the couple were each 17 at the time of their marriage in 1985 and divorced two years later. Daniel had small roles in his mother’s movies Skyscraper and To the Limit, and appeared regularly in her ’02-’04 reality series, The Anna Nicole Show, as well.

With an impressive list of international directors providing interpretations of their own local legends, the blood-soaked 'Field Guide to Evil' brings surreal nightmares to life.