Of the myriad concerts, tributes, benefits, extravaganzas, pledges, and wienie roasts held in response to the devastation Hurricane Katrina heaped upon the New Orleans region, this one feels like the real grassroots thing, with musicians helping musicians get back on their collective feet.

There will be preaching; there might even be a mention of the next day's election, but there will be a firm, rootsy musical vibe as well amongst all the activism. 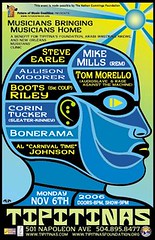 The show — with the unwieldy name of "Musicians Bringing Musicians Home, A Benefit for Arabi Wrecking Krewe, New Orleans Musicians’ Clinic and Tipitina’s Foundation” — and a series of meetings surrounding it was put together by the Future of Music Coalition, and "is an opportunity to talk about music and activism in an environment that will support these musicians and draw attention to their ongoing struggle to rebuild,” said FMC exec director Jenny Toomey.

The assembled visiting and local artists will also play a private show at the Ernie K-Doe Mother-In-Law Lounge, tour the flood damage, and learn about the reconstruction efforts with the Arabi Wrecking Krewe, a non-profit volunteer organization of local musicians that helps musicians and their families salvage and rebuild their homes in the city.

"New Orleans is still in a time of need right now,” said Craig Klein of trombone collective Bonerama, and the Arabi Wrecking Krewe. “The musicians are very vital and an important cultural part of New Orleans. Without them we lose the New Orleans as we know and love."

The music is the glue.

Future of Music Coalition is a national non-profit education, research, and advocacy organization that "identifies, examines, interprets and translates the challenging issues at the intersection of music, law, technology and policy," and each year puts on the awe-inspiring FMC Policy Summit, where the elite and the grassroots gather to cross-pollinate, exchange ideas and information and whatnot.