The critically-acclaimed duo's seventh album more or less successfully tries to be several different albums all at the same time.

When singer/songwriter Kiya Heartwood started to record her second solo album in 1995, she asked her friend, multi-instrumentalist Miriam Davidson, to join her on a few tracks. It quickly became clear that the two had an undeniable musical chemistry, and rather than releasing Singing with the Red Wolves as a solo album, they formed the band Wishing Chair. Over ten years and seven albums later, the duo continues to perform their critically-acclaimed eclectic blend of rock, pop, and traditional folk arrangements.

Folk and Roll: Live in Austin is their latest recording, and it tries to be several different albums all at the same time. In some ways it succeeds, and in other ways it is less successful.

It is an acoustic, stripped-down "live" album, recorded at Congress House Studios in Austin. The arrangement of the song order could easily be lifted from one of their live shows, and the arrangements of the songs themselves are the same as how they perform them live.

Fans who are used to hearing albums with full instrumentation may be surprised by this, but thanks to the engineering and mastering work of Mark Hallman, every note resonates with the fullness one might hear in an acoustically tuned music hall.

The band has recorded and released all seven albums on their own label, and over time, many of the titles in their back catalog have slid into out of print status, despite several new pressings. So, one aspect of Folk and Roll is the role of a "best-of" album. Concert favorites such as "This House" (originally recorded by Heartwood's former band, Stealin Horses), "Copernicus," and "Higher Ground," appear along side a few new songs and one traditional child ballad ("Bonny Lass of Anglesey").

Some of the old favorites were originally recorded when the duo was working with a full band, and over time as they transitioned back to just the two of them, the arrangements were tweaked. "Higher Ground" has lost some of the vocal harmonization layers in the process, but it has gained the energy that until this recording was only present in the live shows. For "Beautiful Soul," Davidson has set down the accordion in favor of the keyboard, adding to the song's Latin pop/jazz flavor, which never quite fit in with the mostly traditional folk album Dishpan Brigade. 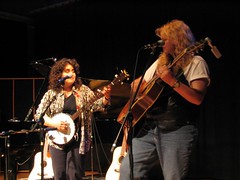 Folk and Roll introduces the listener to three new tunes by Heartwood, the band's primary songwriter. "Boston" was inspired by a wintry visit to the city, and is yet another example of Heartwood's ability to paint a picture with only a few words: "I walk the streets with cobblestones / Headphones, hood up, all alone / River wind cuts to the bone / Hands deep in my pockets." Both lyrically and musically, the song conveys the sense of a pilgrimage in search of answers which lead to only more questions.

"Boston" is followed by a more light-hearted and hopeful tune inspired by traditional fiddle tunes called "Fiddlin' On." The chorus is likely to bring a grin to the faces of those "in the know," as Heartwood cleverly incorporates the titles of some of the more famous reels. One might expect to hear fiddle on the song, but since neither she nor Davidson play it, that role is given to Davidson's versatile use of the accordion.

The third new song is "Sago," and it follows "Dishpan Brigade," which is about the Arnot, Pennsylvania, mine worker strike of 1899-1900. This was the first time that Mother Jones (Mary Harris) organized the wives and daughters of the mine workers into what became known as the dishpan brigade. It is fitting that this song, a fan favorite, should lead into Heartwood's touching tribute to the miners who lost their lives in the Sago disaster last year.

"Sago" is written from the perspective of an anonymous wife who lost her husband in the disaster, although it may have been inspired by one of the victims, Jim Bennett. Even though I have seen Heartwood perform it live, the first time I heard it on the recording, it brought tears to my eyes. She has a few biting words for the mining company and the media coverage, but mainly focuses on the loss and heartache of the mining families. The musical arrangement is a simple finger-picked acoustic guitar pattern backed by chords played delicately on the piano, with Heartwood singing solo. The song does what any good folk song is supposed to do: keep the memory of an event alive for future generations, so that we do what we have to do to prevent it from happening again.

Folk and Roll has a little bit of something for everyone. From newer arrangements of old favorites to brand new songs, the album straddles the line between being a best-of compilation and something fresh and different.