The pot at the end of the recent rainbow for long suffering Jayhawks fans.

The Jayhawks new reunion album Mockingbird Time marks the first time that principal songwriters Mark Olson and Gary Louris have made a record together — at least under the Jayhawks band name — in nearly twenty years.

But it also represents a logical conclusion to the recent renewal of interest in the band many credit with pioneering the modern day alt-country movement. At the very least, the Jayhawks two early nineties releases for American Recordings — Hollywood Town Hall and Tomorrow The Green Grass (Olson’s last recording with the band) — are acknowledged today as classic, groundbreaking recordings. 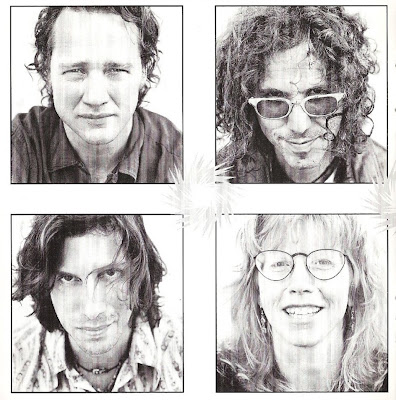 This full band reunion follows Olson and Louris mending fences to make 2009’s more acoustic based “solo” Ready For The Flood album, as well as the Jayhawks anthology Music From The North Country and expanded deluxe editions of both Hollywood Town Hall and Tomorrow The Green Grass.

For long suffering Jayhawks fans, these past few years have been something of a goldmine, that have also included the reissue of the mythical and long out of print Bunkhouse Album.

It would seem then, that Mockingbird Time has to be viewed as the pot at the end of that particular rainbow. The big question here is, does the end result fulfill the fans lofty expectations, or fall short the same way so many other such big time dream reunions have a way of doing?

Any such doubts are put immediately to rest on Mockingbird Time. From the first few moments that the power chords of the opening “Hide Your Colors” come thundering through your speakers, it’s clear that the Jayhawks have lost nary a step despite a nearly two decade absence. Louris and Olson’s trademark vocal harmonies — which along with uncommonly great songwriting, have always been this band’s strongest suit anyway — remain very much intact all these many years later.

Besides the sweet sounding vocals though, the piano flourishes of Karen Grotberg have long been the best kept secret about the Jayhawks. Here, on tracks like “Tiny Arrows,” Grotberg’s always subtle ivory tinkling provides the perfect compliment to all of the sweetness of that pitch perfect, Flying Burrito Brothers inspired harmonizing.

Of course, this would all be for naught were it not for great songs. Thankfully, on Mockingbird Time the Jayhawks continue the great tradition of albums like Tomorrow The Green Grass and Hollywood Town Hall, by providing these in abundance. If singles still mattered — at least outside of the auto-tune manufactured machinery that sells records today — a song like “She Walks In So Many Ways” would be a worldwide number one hit. As it stands, the song is a more than worthy successor to previous Jayhawks gems like “Waiting For The Sun” and “Blue.”

In addition to the proper album, the now common practice of putting out a deluxe edition makes for some very tasty extras. In this case, these come in the form of a bonus DVD that includes rehearsal footage for the album, as well as a very well done documentary film on the making of Mockingbird Time.

With Mockingbird Time, the Jayhawks have made that rarest of reunion albums that makes us realize just why we missed them in the first place. I can’t wait to see these great new songs performed live.