Music Review: The Dukes of Dixieland and The Oak Ridge Boys – When Country Meets Dixie

Jack Goodstein January 31, 2012 Comments Off on Music Review: The Dukes of Dixieland and The Oak Ridge Boys – When Country Meets Dixie 79 Views

Certainly there is nothing inherently wrong with a labradoodle. I’m sure there are those that love them and rightly so; still I suspect there are those who prefer their labras straight, and their doodles unsullied. So when a couple of business types get together and come up with the idea to mash together a couple of stalwart musical groups from differing musical traditions, there are those who are going to call it genius, and others who will have second thoughts. 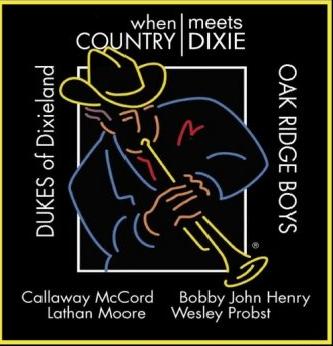 As the liner notes to When Country Meets Dixie recalls it, Dukes of Dixieland manager John Shoup and Jim Halsey, manager of the Oak Ridge Boys, are having a casual conversation. Shoup asks, “What happens when you mix one of the oldest country groups with one of the oldest jazz bands?” “I don’t know, let’s try it,” Halsey answers. And so is born (drum roll) a new musical genre: “Country/Dixie,” or “Dixtry” perhaps.

When Country Meets Dixie, a 12-track album featuring the Dukes, the Oak Ridge Boys (who, it turns out, appear only on four songs) and an assortment of other country singers is the result.

And the result is an album that has some impressive music, but in the end lovers of Dixieland are likely to come away from it happy for the jazz, but wanting more of it, while country fans are more likely to be content with their respective piece of the pie. Although, like the doodle lovers they may well prefer their country unsullied.

Of the four tracks with the Oak Ridge Boys, there is a kind of “rumba-boogie” version of “Bobbie Sue” and a funky take on their platinum single, “Elvira.” Both will have you tapping your toes. Then there are two hymns, “Little Talk With Jesus” and “Unclouded Day.” The latter opens with some impressive work on the drums by J.J. Juliano and has a real New Orleans street vibe.

The album opens with Dukes pianist Scott Obenschain’s jumping vocal on the Phil Harris classic, “That’s What I Like About the South,” which adds some nice solo work from the rest of the band and a terrific ensemble ending. Wesley Probst sings Tennessee Ernie Ford’s bouncy “Fatback Louisiana” and Ernest Tubb’s “Nails in My Coffin.” Besides some mellow brass (Kevin Clark and Ben Smith), the pedal-steel guitar of Nashville sessions star David Spires helps drive in some of those nails. “Back in New Orleans” gets a mellow, laid-back treatment from 73 year old Bobby John Henry with some sweet work on the sax from Ryan Burrage. Callaway McCord adds a hot medley—”Jambalaya,” “I’m Walkin'” and “Don’t Mess With My Toot Toot”—which includes some of the most extended solo work from the Dukes.

Newcomer Lathan Moore is featured on three songs. “Are You From Dixie” is a rollicking romp and “Can’t Fight the Moonlight” is a sweet and tender ballad. But, for me, it is his “Just a Closer Walk With Thee” which is the absolute highlight of this album. It begins with Ryan Burrage’s clarinet and a bit of Alan Broome’s bass, and then plays like a duet between the clarinet and Moore. The rest of the band gets in as well, but it is Burrage that steals the show. The album is worth it for this track alone.

So, labradoodle? “Dixtry?” When country meets Dixie and you get a “Closer Walk” like the one on this album, or a “Bobbie Sue,” or the “Jambalaya” medley, it’s a great combination. Still, I can’t help thinking how much I would have liked to have heard more from the Dukes.