The band reunited in 2000 and recorded this live show. Now fans can finally get a copy of it.

Music Review: The Bangles – Return to Bangleonia: Live in Concert

Released last month, Return to Bangleonia: Live in Concert (Shout! Factory) was originally filmed at the House of Blues in September 2000, shortly after The Bangles reunited with their original lineup of Susanna Hoffs (Vocals/Guitar), Debbi Peterson (Vocals/Drums), Vicki Peterson (Vocals/Lead Guitar), and Michael Steele (Vocals/Bass). It is unclear why it has taken nearly seven years for the band to release the DVD, but nevertheless Bangles fans are happy to finally have an official recording of a live show, preserved in a relatively uncut format.

As a child of the ’80s, my experiences with The Bangles' music were very superficial. I remembered hits like "Walk Like an Egyptian" and "Manic Monday," but I had no context for them in the broad swath of The Bangles' repertoire. In fact, it was while watching the DVD that I first heard the term "paisley underground" to describe the 60's influenced jangle pop garage band sound of the music scene the band was a part of in Los Angeles. Along with being entertaining, Return to Bangleonia: Live in Concert is also educational.

Despite the nearly ten year hiatus, the band's performance is strong and tight. With the exception of Steele, everyone appears to be having a great time performing. 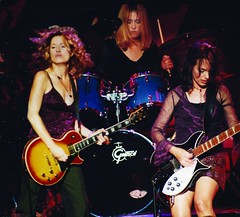 Five years after the show was recorded, Steele retired from the band, so I'm not particularly surprised to see indications of that eventuality in this recording. Many of the songs they performed were early versions of what would become their 2003 release, Doll Revolution. There are a few places where the newness of the songs seemed to trip them up. Most notably, Hoff's vocals are off from time to time. Otherwise, it is an impressive performance for a band edging into their 40s who are trying to maintain the energy and drive they put out in their 20s.

Aside from the fun of seeing The Bangles perform live, one of the highlights of the DVD is the commentary track recorded by Hoffs and the Petersons. It sounds like it was done sometime in the past year, and it provides valuable insights into both the songs and the performance. With all the stories of their memories of what happened that night, as well as the critiques, it reminded me of the post-show analysis conversations I have had many times with my friends who are in bands. The end result is a slightly deeper understanding of the songs, as well as the performers themselves.

The bonus interview with Hoffs and the Petersons adds to that deeper understanding, and it's also a bit disconcerting to see how much they have aged since the show was recorded. Other bonuses include acoustic performances of "Manic Monday" and "Ride the Ride." From their comments, it sounds like the latter song was cut from the live show, which may be part of the reason why they recorded the acoustic version.

Return to Bangleonia: Live in Concert is a great recording for über and casual fans alike. Those who have followed The Bangles since its inception will be happy to have the live recording, and those who are only passingly familiar with them will gain a better appreciation for their contributions to the musical history of modern rock.

As a bonus, here is a clip of "If She Knew What She Wants":