A cohesive and fun collection of delicately blended electronic/organic tunes.

In 2003, The Age of Rockets frontman Andrew Futral created and released his first record under the moniker, entitled The Drive Home, while attending the Purchase College Conservatory of Music.

For his second effort, Hannah, he pulled in fellow classmates Bess Rogers and Saul Simon-MacWilliams. Futral is mainly responsible for the songs, arrangements, and the electronic elements, but it wouldn't have quite the same complexity and power without the organic instrumentation and vocals that Rogers and Simon-MacWilliams bring to the recording.

Hannah is designed to be a palindrome of an album. The first five songs reflect the last five songs, with the middle sixth track creating the pivot point. Listening to an album that is half-music, half-mathematical art piece can sometimes be disappointing, but despite (or because of) this structure, Hannah stands on its own as a cohesive and fun collection of delicately blended electronic/organic tunes. Honestly, I hardly noticed the relationship between the songs in the dozen or so times I have listened to this album over the past couple of months. 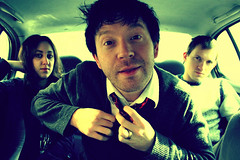 When I played this album for the first time, I was worried that I was not going to like it. However, by the time the song "Elephant & Castle" came up — with its synthesized percussive vocal chords — I was hooked. Hannah begins with a slower piece ("What Story Down There Awaits Its End?") with plenty of space between the notes and a sense that celestial bodies are singing in the background.

This is followed by an uptempo song ("Avada Kedavra") that begins with a wall of sound created by full-throated harmonizing vocals resting on synthesized bass chords, which hints at the layers and shifts that occur throughout the rest of the album.

There are several other stand-out tracks, such as "1001 Dirty Tricks to Kill Your King," which sounds like it should be accompanied by courtly dancers from the 1700s, and "We Won't Stop," with its strings interlude featuring the highly addictive melody plucked on the violin.

And, I would be remiss if I did not mention "H. Soft Escape," which was already in my top five favorite tracks on the album before leaping to number one due to the fantastic percussion work throughout the last minute of the song.

Futral's vocal work is likely to appeal to fans of The Apples in Stereo or The Postal Service. Hannah should be in the collection of every electronic pop music aficionado.