New York's Rubin Museum of Art is a magnificent new institution occupying the former Barney's, in the Chelsea neighborhood of Manhattan. They've preserved the store's majestic central staircase and turned the four-plus floors that wind around it into galleries dedicated to Himalayan art – mostly religious iconography from the region's Buddhist, Hindu, and ancient Bon traditions.

Unbeknownst to your humble correspondent – who works in an office just a few blocks from the museum – its creators had also built a spacious basement performance space with bell-clear acoustics. Last night I attended the first in the museum's all-acoustic jazz series. Because it's co-sponsored by the new Jazz Museum in Harlem (which doesn't have its own space yet), the concerts are collectively called "Harlem in the Himalayas." Yes, it's in the basement, not on top of a mountain – but at least the ceiling is high. And the sound is warm and clear. Tenor saxophonist and flautist Ted Nash, with Frank Kimbrough on piano and the indomitable Rufus Reid on bass, played two short but sparkling sets completely un-amplified – no amps, no mics, no speakers whatsoever.

Except for the musicians being on a high stage – and thanks partly to the tables interspersed among the rows of comfortable chairs – it felt like an intimate club, but without the clattering of glasses and interruptions from the wait staff. (There is no wait staff. Drinks and snacks can be bought at the spiffy new bar upstairs and brought down.)

Highlights of Nash's sets included Andrew Hill's "Tripping." Reid had played on the original recording, and Nash and Kimbrough joked about how they knew the song better than the bassist. A lovely, spacious rendition of Kimbrough's ballad "Joie de Vivre" made a fitting tribute to the late saxophone great Dewey Redman, who died last month. Kimbrough had recently been in Redman's band and you could feel the warmth in his playing. A hilarious romp through Thelonious Monk's "Green Chimneys" closed the first set.

Jazz, perhaps more than any other kind of music, can be appreciated in a multitude of ways, maybe because it's simultaneously visceral and cerebral. Its improvisatory nature, its roots in rhythmic forms like the blues and New Orleans march music, and its tendency to mimic the sounds of the human voice and body – the popularity of the saxophone in jazz is no accident – all appeal to the gut. At the same time, its intellectual and exploratory qualities engage the frontal lobe. In the audience, some laugh at the musical jokes, others don't. Some sit meditatively through a hummable song while others sway and tap to the beat. Some respond to more demanding pieces, like some of Nash's and Kimbrough's modernistic, rhythmically intricate compositions, by listening attentively as if at a classical concert, appreciating every note; others continue to sway as if there were a danceable beat, letting the music wash over them. Even a modestly musical ear appreciates how musicians like Nash and Kimbrough fit common jazz tropes into complex new structures (or nonstructures), like a painter dotting human figures into a fantastic or abstract landscape.

The trio left the world of jazz entirely for one piece, "Kanha's Trail," a musical meditation to one of the museum's most impressive statues. Pictures of items from the collection were projected on a screen above the musicians as they played. Reid drew a remarkable, deep harmonic from his bow which served as the drone under Nash's fluttery flute melodies and the zithery sweeps Kimbrough took directly off the piano strings. 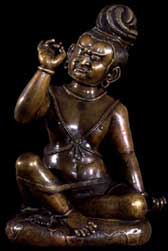 These days it's not hard to see jazz inexpensively in New York, but it would be hard to find a better setting for it than this. This coming Friday, catch clarinetist Ken Peplowski (of Benny Goodman's last band). On October 6, trombonist Wycliffe Gordon and his band perform a new accompaniment to D.W. Griffith's epic 1916 film Intolerance – that should be quite an event. The Friday jazz series then resumes on October 20 and runs most Fridays through the end of the year and into next, with performances by Anat Cohen, Christian McBride, electric guitarist Russell Malone, Uri Caine, and many others.

Check the full schedule. Tickets are $15 in advance, $20 at the door, and include museum admission. The museum is open late on Fridays, so you can take in the exhibits either before or after the show.