Comparisons between these new versions of old Genesis songs with the originals are probably unfair, but also inevitable.

When considering the history of Genesis, most fans tend to view this band through two distinctly different prisms. For these folks, the “Gabriel” and “Collins” eras exist as polar opposites – light years apart artistically (and certainly commercially).

Two different bands, representing approaches completely independent from one another. 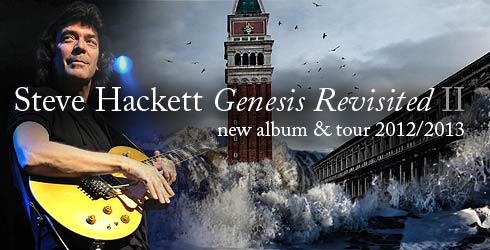 This rear view appraisal, though in some ways unfair, is also dead-on accurate. The eighties pop-rock, MTV video darlings led by drummer/singer Phil Collins that sold albums by the truckloads, bares so little resemblance to the artier, trailblazing prog-rock of the earlier Peter Gabriel model, as to be virtually unrecognizable as the same band.

But where these same two opposing – and equally vociferous – camps of Genesis fans most often miss the point is in identifying just where the division between the “prog” and the “pop” incarnations of Genesis actually took place.

The departure of Peter Gabriel after the tour behind 1975’s The Lamb Lies Down On Broadway is most often cited as the breakaway point. But the truth is, Genesis made at least two recognized prog-rock classics (A Trick Of The Tail and Wind And Wuthering) during the post-Gabriel years.

In retrospect, Hackett’s split from the group was what really cleared the decks for Genesis’ subsequent musical shift towards commercial pop – much more so than Gabriel leaving them behind ever did. Hackett’s own post-Genesis career has had its own share of creative missteps of course (GTR, anyone?).

But on the bulk of Hackett’s solo material over the years, his aim has remained mostly true.

Simply put, and even though he is largely unrecognized as such, Steve Hackett is one of the most underrated guitar players on the planet. For proof of this, one need look no further than his work on those original Genesis albums, and on early solo recordings from the same period like Voyage Of The Acolyte and Spectral Mornings.

From the quiet, acoustic understatement of “Blood On The Rooftops,” to the crying sustain heard during the closing section of the epic “Supper’s Ready,” Hackett’s guitar playing with Genesis, though often overlooked at the time, was an integral component of the many elements which made up the band’s densely layered sound.

These songs, along with a few from Hackett’s early solo career, get a long overdue second look on the just released Genesis Revisted II.

But the facelift is mostly a cosmetic one. Unlike its predecessor Watcher of the Skies: Genesis Revisited, on the second volume of Steve Hackett’s re-imagining of his early work with Genesis, the arrangements remain mostly true to the original versions. The biggest differences here are in the vocals – which are taken on by a variety of singers including Steven Wilson (Porcupine Tree); Michael Akerfeldt (Opeth); and John Wetton (Asia, King Crimson).

For the most part, the kids all nail their parts in loving, convincing fashion. Old-school prog-rock vet Wetton does a particularly nice job on “Afterglow.” The one minor misstep is when Amanda Lehmann takes on Sally Oldfield’s original vocal part on “Shadow Of The Hierophant,” from Hackett’s first solo album Voyage Of The Acolyte. Some things simply shouldn’t be messed with, and Oldfield’s oddly haunting voice on that track is definitely one of them. The deep thudding drums of the original are also sorely missed.

The results become even more mixed when the originals are matched up with modern-day studio technology. If you grew up with Genesis albums like Foxtrot and Selling England By The Pound, it’s hard to miss the comparatively flat sound here on songs like “Return of The Giant Hogweed” and “Dancing With the Moonlit Knight,” when placed side-by-side against the edgier-sounding originals.

On the other hand, songs like “The Lamia” and especially “Ripples” (which beautifully reproduces the swelling mellotron of the original version), sound pretty great on these new recordings. Hackett’s guitar has also never sounded better than it does here.

In much the same way that the tired arguments about the two incarnations of Genesis are mostly unfair, comparing the updates heard here with the originals is mostly a case of apples and oranges.

But the contrast is at times also impossible to ignore.