The spirit of American Folk music is alive and well and continuing to grow and develop, just like the folk it speaks to.

I have a confession to make, although it might not be much of a revelation.  Most have you probably guessed it a while back, but I'm a folkie. Oh sure I shaved my head in the late seventies and early eighties, listened to The Clash, and called myself a punk. But I must have been one of the only shaved heads in attendance at the Pete Seeger and Arlo Guthrie concert at the Ontario Place Forum in the summer of 1980.

The only relief I had from classical music being shoved down my throat at home as a kid was to listen to my parent's collection of The Weavers, Pete Seeger, and Talking Union albums. Pride of place was of course given to Songs of the Lincoln Brigade, a collection of songs from the Spanish Civil War of the 1930s.

Maybe it was because the majority of the songs were in English and sung so they could be comprehended, or the fact they were played on instruments no more complicated than a guitar made them appealing. But the fact remains that I've listened to folk music through all the different fads popular music and I have gone through. It was like a constant friend who I could be sure of when everyone else was just a little too screwed up to make sense or offer any comfort.

So it goes without saying when I saw there was a third generation of Guthries striking out on her own, following in Arlo and Woody's footsteps, I was intrigued and wanted to hear some of her music. Sarah Lee Guthrie performs in a duo comprised of herself and her husband Johnny Irion. Their most recent release was 2005's Exploration. The good folks over at New West Records were kind enough to send me along a copy of the CD so I could give it a listen and tell you about it.

I'm having a hard time staying focused on the disc, I keep wanting to circle away from it whenever I get close, and talk about things like folk music, blah de blah etc. etc. Every time I walk up and approach mentioning it I feel like a career single "A" player stepping up to home plate, with Roger Clemons on the mound, totally unprepared for the task at hand.

Just jumping out over the plate and saying holy shit their great before losing consciousness from having my brains being splattered all over the backstop by a 100mph fastball doesn't really constitute an effort. So I'm going to go down swinging trying to tell you why you're life will be so much better if you own this CD.

I could tell you how incredible their voices work together in harmony; that they are so seamless on occasion you can't tell which voice belongs to which person as they twine in around each other like a closely knit vine wrapping itself around the trunk of a tree. Or that her voice soars in the stratosphere, it makes you think of the wind in the treetops that doesn't come down to earth but you know it's there by the way the trees bend before it. But it can also plummet back down to earth in the blink of an eye and leave you guessing at where she's been and what she's seen only to have her tell you all about it in the next line.

I could tell you how his voice has the same eerie quality Neil Young's can take on occasionally without him sounding a bit like Neil Young. Or maybe I could say when I listen to him sing I think of the world laid out stretched around me; an endless panorama of sights and sounds traveling in all directions and cutting across time and place. Not necessarily of this time but so current it breaks your heart while at the same time gives you hope of a better tomorrow. 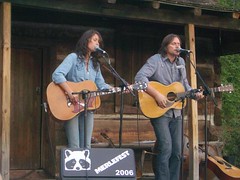 I could tell you they sing songs about love, relationships between couples and between peoples. That their songs speak of dignity, respect, and the wonders of the universe; that they are by turn, angry, sad, happy, and hopeful no matter what they're singing about. I could say some of their songs sound country, some sound like rock and roll, and some sound like old time country songs like Sarah Lee's granddaddy wrote.

I could tell you all that shit we normally put into reviews and in reality I wouldn't feel like I'd told you the first thing about them or their music. It's too real and personal an experience listening to Exploration to simply dissect it easily with mundane sentences of praise or critique.

To merely say I liked the CD would be an obvious understatement; it moved me, it made me think, but most of all it involved me. For me that's always been what it comes down to for music to qualify as folk music, how it is able to involve me on a personal level that often escapes more complex arrangements of pop music.

That way I'm able to preclude those who would otherwise qualify as "folk" musicians because they happen to be solo performers who play an acoustic instrument but sing facile songs of cheap sentimentality. It also opens the door to allow music of a more complex nature into the genre based on its ability to connect with "folk" rather than what instruments are being played.

Although Sarah Lee and Johnny are all over the map musically they are just as much folk music as their solo performing predecessors were. Stylistically they may be worlds apart from the old Talking Union and Weavers records of my parent's record collection, but emotionally and spiritually they are among friends.

Listening to Exploration is not always a comfortable experience nor is everybody going to find themselves in agreement with all of the sentiments expressed on the CD. But that is only a reflection of the honesty and integrity of the artists behind the project and their love for what they do. Listening to this album is to be assured that the spirit of American Folk music is alive and well and continuing to grow and develop, just like the folk it speaks to.