Music Review: Rick Springfield – We Are The ’80s

Even though Rick Springfield is one artist who transcends the eighties — his first album was released in the early seventies and he continues to put out new albums and tour to this day — those songs from the '80s are still firmly entrenched in the minds and hearts of most who came of age in that decade. His We Are The '80s collection spans the entire decade, including songs like his breakout hit "Jessie's Girl" from Working Class Dog (released in 1981) through the title song from Rock of Life (1988) – a total of 14 tracks from six different albums.

Working Class Dog, just released in a 25th anniversary CD, complete with expanded liner notes from Springfield himself, first hit stores' shelves within weeks of him first appearing as Dr. Noah Drake on the mega-popular General Hospital, a role he also returned to late last year. Though the role on the soap is often credited with launching the album to the top of the charts, it's hard to dismiss the songs. "Jessie's Girl," "I've Done Everything For You," and "Love is Alright Tonight" are the singles from WCD featured on We Are the '80s. 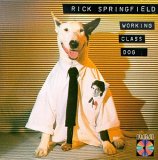 What can be said about "Jessie's Girl?" Kept alive in recent movie soundtracks such as Boogie Nights and 13 Going on 30, as well as any and just about every compilation disk honoring the decade, there is hardly a soul alive who doesn't know the words. But I think the appeal goes beyond the catchy lyrics and memorable tune; it's about the underlying emotion – the longing. Wanting someone you shouldn't or can't have is a pretty universal and identifiable feeling.

"I've Done Everything For You" and "Love is Alright Tonight" come down to that same basic principle. You can relate to it, whether it's the resentment and anger over a one-sided relationship or the burning need of a young couple to get away from everything and everyone and just cut loose. Yes, those early lyrics appealed to the teen set ("I'm picking up my baby tonight/though her daddy's making trouble it will be alright") there was something deeper, more universal ("Everyone's saying the sky's gonna fall/Don't know where it's going to stop if it stops at all").

It's evident by the selections from later albums featured on We Are the '80s — Living In Oz, Tao and Rock of Life — his music matured along with the subject matter. From Tao, "State of the Heart," is a wispy romantic ballad still featured in his live concerts. The song is a Mondo Rock cover Springfield made his own. "Celebrate Youth" addresses how the ugliness of the world (racism and hate) are taught and don't exist in a child's eyes.

As with most of the artists featured in this series, Rick Springfield was able to maximize his exposure by producing videos that became staples on MTV. Featured here is the one for "Affair of the Heart" from the Living In Oz album. Though most of his songs seemed to come down to the most basic of emotions, this was one of the first where it was laid so plainly on the line. The video, however, is a more candid look at a life in the spotlight.

"Rock of Life," the title track from the album of the same name, was the last album he would release in the '80s, and yet another showing maturity and development of his music. Springfield has often been quoted as saying the song is about the birth of his first son, and the emotions he experienced, though the lyrics state it plain enough. "Is it something in my head (look up)/Or the time of season/Or the little boy in my hands (must be a reason)" speak of the universal emotions a new parent experiences when they realize the responsibility they bear for the new life they've created.

Also present are singles from Success Hasn't Spoiled Me Yet, and the Hard to Hold soundtrack. Though the movie was ill-fated, the songs that came from it, "Love Somebody," "Don't Walk Away" and "Bop 'til You Drop" are classic mid-eighties fare, and did quite well on the charts.

Right behind "Jessie's Girl," "Don't Talk to Strangers" from SHSMY is probably the second song most can name in five notes or less. The song, like many of Springfield's, is rooted in the angst and emotions of the romantic relationship and sings of the jealousies and insecurities involved when one gives their heart away. 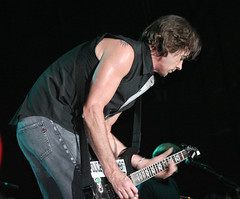 Whether it is the lustful wishes of "Jessie's Girl" or the deep contemplative "Rock of Life," Springfield was a mainstay in the '80s because of the songs and the way listeners were able to connect to the emotions and ideas contained therein. Delivered on catchy melodies and executed with rocking guitar riffs, it is what set his music apart then and is still very much the basis of what he produces today.

As is evident through the songs contained on We Are The '80s, Rick Springfield's music grew and changed throughout the decade to keep him current and topping charts, making his name one of the first mentioned when conversation turns back to the decade of leg warmers and colored Converse tennis shoes. His continued dedication to the music not only put him in a headliner role on this past summer's We Are the '80s tour, but keeps him churning out new music as well as touring the country on his own.