Rammstein's first retrospective is a strong reminder of just how powerful this band can be. 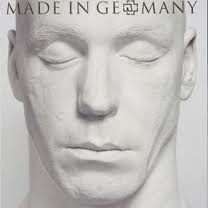 While it was Nine Inch Nails and Ministry who first brought the combination of industrial and metal to the masses in the late eighties, Rammstein took things to a whole new level. Their live shows are legendary, and their music remains as explosive as their name suggests. Being a German band, one might logically assume that they hail from Rammstein, hence the name. In fact, they are actually from Berlin. The name is a shortening of their original moniker; Rammstein Air Show. It is a reference to the worst air-show disaster in German history, at Rammstein in 1988. Have they no shame? In a word, no. Rammstein have done it their way for nearly 20 years now, and show no signs of letting up in the slightest.

For a group who have enjoyed huge worldwide success from the very beginning, it is a little surprising that they have waited so long to put out a retrospective collection. Made In Germany

is a 16-track “greatest hits,” which also features one brand new track, “Mein Land.” The song shows that the band have lost none of their outrageousness, and the beach-party video for it is hilarious.

For whatever reason, the band have chosen to heavily focus on two of their six studio albums here. Of the 16 songs included on the single CD edition of Made In Germany, nine are from Mutter (2001) and Reise, Reiese (2004). That leaves but six songs from the four remaining albums. I’m not complaining though, this is as solid a collection as anything we could ask for.

When Rammstein’s debut album Herzeleid was released in 1995, German critics tripped over themselves to give a name to the music. What they eventually came up with was the awkward Neue Deutsche Harte – which translates to “New German Hardness.” It kind of reminds me of the even worse one the guys at Kerrang! created to describe bands like Def Leppard and Iron Maiden. Anyone remember the New Wave Of British Heavy Metal?

Made In Germany only includes one track from Herzeleid, “Du Riechst So Gut,” and it rocks hard. The album was not even released in the US until 1998, after Sehnsucht had broken the market wide open. 1998 was a long time ago, but I still remember how much of an impact that record made. It was huge and crossed all the boundaries. One cool bit of trivia is that Sehnsucht is the only album sung entirely in German to ever reach platinum status in the United States.

Given all of this, I was a little surprised that Made In Germany only includes two songs from Sehnsucht. You certainly cannot argue with the choices though. Both “Engel” and “Du Hast” show early Rammstein at their very best. “Engel” in particular became something of an anthem, and for years was their set-closer. The first time I saw them, it blew me away. There was plenty of pyro throughout the show, but they pulled out all the stops for “Engel.”

In the four years between Sehnsucht and Mutter, the band toured relentlessly, and released the live Live aus Berlin album. They came back as hard as ever though with the studio albums Mutter and Reise, Reise. Five great tracks from Mutter are present here, and four from Reies, Reise.

For this fan, Reise, Reise is the band’s finest moment. There a number of themes running through the album. The overall concept is based on another airplane tragedy, that of the Japanese Airlines Flight 123 in 1985. It was the largest single-plane disaster in history. Of the 524 passengers aboard, only four survived. In addition to tracks such as “Mein Teil,” and “Keine Lust,” in which the band put themselves into the frames of mind of the passengers, there is “Amerika.” The song is a scathing indictment of George W. Bush’s America, especially its policies abroad.

Many of the songs on Rosenrot (2005) were initially recorded during the sessions for Reise, Reise, but in the final analysis did not fit the concept the band had in mind. They are not inferior in any way, as the title track itself clearly indicates. The most recent Rammstein studio release came in 2009, Liebe is fur alle da, German for “Love is there for everyone.” The video for “Pussy” once again set the censors into a tailspin, and featured the band simulating sex, among other delightful treats.

Finally we come to the new “Mein Land,” which is weirdly retro. Not so much a return to mid-nineties Rammstein, as much as a visit to the eighties industrial sounds of KMFDM or Die Krupps. It is an excellent nod to the past, which retains all the power and crunch the band are so renowned for.

Besides the 16-track “basic” edition of Made In Germany 1995-2011, there are two expanded versions. The Special edition includes a second CD of remixes done by friends and fans such as Faith No More, Laibach, and even the Pet Shop Boys. The mondo Super Deluxe package features the two CDs, and three DVDs – with tons of footage and all of their videos. The set comes in a steel box and includes a 240-page book. This one is limited to 1200 copies in the US, making it the ultimate Rammstein item for those who just cannot get enough of these Neue Deutsche Harte heroes.

Angelina Jolie Reveals Double Mastectomy – Will Her Bravery Help Redefine What Is Beautiful?

Not one to seem to be held down by standards, Ms. Jolie is now setting new ones.