If the performance on Octane Twisted is any indication, we haven't heard the last of Porcupine Tree.

With the future of Porcupine Tree officially on hold (at least for now) while Steven Wilson pursues both his solo career and various other projects, Octane Twisted represents something of a holdover gift for fans still hoping the hiatus is only a temporary one. 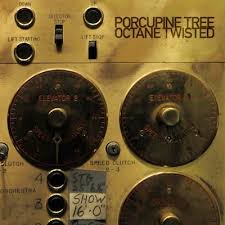 Recorded primarily during the Chicago stop of the tour behind their last studio album, 2009’s The Incident, this limited “deluxe” 2 CD/1 DVD edition of live tracks is beautifully packaged in a hardbound foldout case loaded with new photographs. Octane Twisted is also available in a more modest, standard 2CD package.

The first disc features a complete run-through of the ambitious album-length title opus from The Incident. The second cherry picks selected tracks from throughout the band’s career, including crowd favorites like the slightly shorter fifteen minute epic “Arriving Somewhere But Not Here,” as well as more rarely played songs like “Stars Die.”

But the bonus DVD, which features the same complete performance of The Incident as heard on that first CD, is the real kicker here. If this really is the last we’ll be hearing from Porcupine Tree for awhile, then they are going out on a very high note. The performance of The Incident is a stunner, and the sound quality is outstanding – particularly in the case of Gavin Harrison’s drumming.

The original studio recording of The Incident is not without its flaws – it’s hard to listen to “Time Flies” without being instantly reminded of the similarities to Pink Floyd’s Animals for one thing. But you can’t help but admire the audaciousness of Steven Wilson in trying to produce an album-length conceptual piece like this. It’s like the modern-day equivalent of something like Jethro Tull’s Thick As A Brick – an album which Wilson, not coincidentally, recently remastered for its anniversary release.

The thing is, even though it shares some of Tull’s more pretentious qualities, The Incident is ultimately a more consistently listenable piece of music. On this live recording, even the shorter, more ponderous passages reveal intricate little shades of light and shadow only hinted at on the original. But when called upon to crank it up on the more rocking parts of The Incident like “Drawing The Line,” Porcupine Tree prove they can also tear the house down.

Watching this performance on DVD, you also see for the first time how part-time member John Wesley really earns his MVP stripes as backup guitarist and vocalist to Steven Wilson. All of these guys sound great here, including bassist Colin Edwin (whose technique of bending and holding down a note should be mandatory viewing for all aspiring four stringers) and keyboardist Richard Barbieri.

But Gavin Harrison’s drumming really steals the show on this DVD.

Harrison has always been a monster drummer. From the smallest little cymbal flourishes to the most crashing percussive assaults, he has never looked or sounded better than he does here though. If there was ever any doubt that Gavin Harrison is in the same league as guys like Neil Peart, it is all but erased here. Considering that he had a hand in the sound mixing of this DVD along with Wilson, it’s still not that surprising that his drums are as out in front as they are. As good as the sound on the DVD is though, there are some small flaws in the camera work. The good comes in the fact that they do a nice job of mixing the background visuals, with shots of everyone in the band – not just Steven Wilson. The bad comes mainly when they do focus on Wilson, but occasionally cut off the top of his head in some shots.

Speaking of Steven Wilson, although he says he wants to concentrate on other projects for now, it really is hard to believe this is the last that we have heard from him playing with Porcupine Tree. Over the years, Wilson has shown an almost inhuman ability to juggle multiple projects spanning multiple genres.

But when the muse leads him back towards metallic prog – and eventually it will – I can’t imagine him finding a band better suited for it than this one.

If the performance on Octane Twisted is any indication, we haven’t heard the last of Porcupine Tree.

Armonite delivers a dazzling fusion of prog rock and classical on 'And the Stars Above.' It's as if Liberace, Mozart, and Canada’s Rush got together for a jam session.