This up-and-coming pair of singer/songwriters are creating modern tunes that are reminiscent of 1960s pop, rock, and folk.

You might not know it, but Lexington and Louisville (Kentucky) are hotbeds of modern music. The bands and solo artists range from country and folk to rock and pop, with all sorts of variations and experimental genres in between. One such group is Lexington-based Petticoat, Petticoat, who create songs that are reminiscent of 1960s pop, rock, and folk.

The core of the band is Kristin Messina (vocals/harmonica) and Dickie Haydon (guitar/vocals/keyboards/harmonica). The rest of the band members vary over time. For the purposes of this review, you may be interested to know that Scott Overall (drums/percussion) and Jackson Silvanik (bass) appear on Every Mother's Child (Kalmia Records). This is Petticoat, Petticoat's first album, which surprised me because it is so good I expected that they would have had several previous recordings to fine-tune their studio skills in order to produce this one.

Haydon is the primary lyricist, and he stays firmly in the realm of rock and pop lyrics, never straying too far into the storytelling of folk. Regardless of the style of music that is used to dress the song, Hadyn keeps the message simple and direct. He sings "you've got tank tops and orange tans / and we're bathing all dressed in sand / give me your longest finger / 'cause I've got a ring for your hand" in one of the verses of "Crosshair," and the rest of the album isn't much more complicated than that. Compared to some of the pretentious lyricism prevalent in indie music, it is refreshing to hear someone writing straightforward lyrics while maintaining the poetry of the form.

One of the highlights of Every Mother's Child is the waltzing "Love In An Alley," which shows off the warm tones of Messina's vocals. 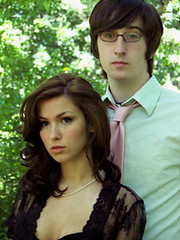 Another gem from the album is "We're Gonna Be Poor." The song is a blues-rock romp through the economical trials and tribulations of musical couples. "Maria the Tour Guide" is a sun-drenched acoustic pop for modern-day hippies. Finally, "Glittering Heels" concludes the album with the satisfying crash of electric guitar and percussion that is guaranteed to make pop-rock fans squee with delight.

Every Mother's Child is a promising beginning for Petticoat, Petticoat. I look forward to hearing what they will do next.