A cappella arrangements that are so good they make me want to listen to Coldplay, among others.

One of the things that continue to draw me to a cappella music is the intimacy it conveys. The voice is not hidden behind instrumentation or electronic trickery. It is left exposed in front for the world to hear.

The same is true with a cappella covers of songs that originally used modern instrumentation. Even when the choir of voices behind the lead singer is replicating the instruments and percussion of the original, the lead voice remains bare. Sometimes it takes that bare intimacy for me to realize just how good a song is.

I first had an inkling of this when I heard folk singer/songwriter Rose Polenzani do a cover of Whitesnake's "Here I Go Again" some years ago at a live show. I never liked the song as much as I did after I heard her version of it. The same thing happened when I heard the University of Pennsylvania Penny Loafers' a cappella cover of The Postal Service's "Such Great Heights" last year. Their cover made me give the song and the band a second listen, and now I'm hooked on The Postal Service. 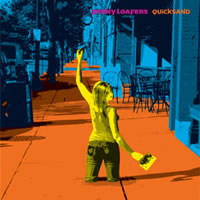 Given all that, it was with eager anticipation that I hit the play button for the first track of the Penny Loafers' new album, Quicksand. Once again, I was both surprised and pleased by how much I enjoy their versions of modern pop radio songs I never would listen to in their original incarnations.

"Swallowed in the Sea" (Coldplay) is a prime example of this. I cannot stand to listen to Coldplay. Maybe they are more interesting now, but their first hit single in the US was so dreary that I was immediately turned off and have not bothered to listen to them since then. However, Sam Cohn's a cappella arrangement and performance as lead vocal has made me think I should try them again. The song has a hint of folk to it, as if it had a history in an old English seaport.

Except for Sia's "Breathe Me" and Amiee Mann's "Humpty Dumpty," all of the songs on Quicksand are new to me. Those two are arranged close to the originals, as far as I can tell, and I can only expect the same is true of the rest of the album. The group has over a dozen arrangers represented on this album, and despite that they have kept the quality consistent. There is not a track on the album that stood out either positively or negatively.

A cappella purists might quibble over the obvious studio tweaking on the recording. There are a few places that stand out as examples of what the human voice cannot do without some digital augmentation. Even so, the quality of the recording is still impressive. The Penny Loafers have followed up Side A with another fine collection of a cappella tunes.

The Penny Loafers CDs (all eight of them) are available only on their website or a few online a cappella distributors. You can preview and download individual tracks or entire albums from acaTunes.