This debut album shows tremendous potential, but still needs a bit of work before hitting the big time.

The two founding members of the Washington, DC based indie pop/rock group Pash met while attending a small liberal arts college in a rural Virginia town. After Meredith Munoz and Erik Bruner-Yang began their musical collaboration, they added Bruner-Yang's roommate Jon Bibbs on drums. Eventually bassist Ryan McLaughlin joined them, and the quartet gelled into the group as it is known today. Described by The Washington City Paper as "Dismemberment Plan meets Kelly Clarkson," the group references the best of 90s indie pop while also creating their own distinct sound.

The first thing that stands out, aside from Munoz's clear vocals, is the constant, driving, wall of sound pouring out from the instrumentation. Throughout nearly every song, the drums, bass, and guitar never seem to stop, constantly pouring out beats and sound. It's varied enough to stay interesting, but after a while it becomes exhausting. The ears hardly have a moment's rest, aside from the short breaks as the CD (or MP3) player moves from one track to the next, although thankfully the intensity lessens in the last few tracks. 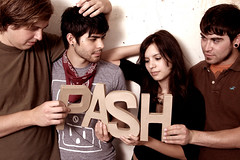 The one thing that saves the mind is Munoz's vocals. Regardless of the intensity or volume of the band, they manage to pierce through to the listener. This is most striking on the title track, "The Best Gun." The fragility and pain in her voice as she hits the sustained high notes is enough to wet the eyes for it's beauty, not to mention the added impact of the I-should-have-known-better lyrics.

One of the more lusciously delicate songs on the album is "The Promised Land." It's short and sweet, and the sparse lyrics are able to imply a great deal more than just the words themselves: "I make friends / Packed my bags / Drew maps on my hand / What happened to the promised land / Where you and me were supposed to meet / But I made a mistake / And let a heartache get there first / Never again / Never again" The electric guitar is strummed slowly through sun-drenched distortion, reminding the listener of summer soul tunes, and creating a sense of what that promised land might have been like. Combined with the words and Munoz' soulful vocals, the song is heavy with wistful regret.

Now, I'm a rock 'n roll gal at heart, but I found myself gravitating more to the softer side of Pash. After the aural assaults of most of the album, the deep and rich tones of the strings on "Cosmopolitans" were just the right thing to help me center and find closure. Listening to that particular track with my good pair of headphones was enough to send shivers up and down my spine.

The band has great potential. Their arrangements are varied and indicate the ease with which they shift gears from intense to laid-back. However, save for a few songs, I found their lyrics to be underwhelming. Since this is their first album, I'm inclined to be more forgiving in that regard. Hopefully Pash will take some time to work on crafting their words as well as they craft their music. If they do, there will be nothing to stop them from succeeding in their careers.