He was the man, and one of the most important blues singers of the twentieth century.

I remember seeing Muddy Waters for the first time when I was seventeen. He was part of the concert movie, The Last Waltz, staged by The Band. He was a dignified, older black gentleman, looking for all the world like a minister who'd wandered onto the wrong stage, surrounded by a bunch of scraggily-looking white kids, and singing the most amazing Blues song I'd ever heard.

He just planted himself there on the stage and you knew that he was rock solid. His music came from somewhere that none of these others had tapped into and probably never would. Oh Clapton, Butterfield, Al Kooper, and Robbie Robertson can all technically pull off the Blues, and some even have enough soul that they occasionally catch a glimpse of the real thing, but they never matched the experience of living the Blues that Muddy Waters could bring to a song.

For months after seeing him sing that song, I was hearing that driving beat in my head and that voice singing out. The only thing I came across that was equal to the power of that voice was upon hearing a black gospel group later in the year who declaimed their music in the same way. The only difference being that while they were singing about God and being saved, Muddy Waters was singing about more profane maters, stuff that happened here on earth and not in some tentative hereafter. 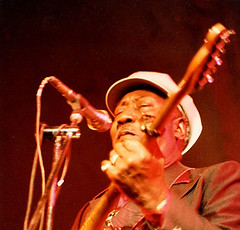 McKinley Morganfield was born in either 1913 or-15 depending on which birth certificate is to believed, in Jug's Corners, Mississippi. He was first recorded in 1941 when Alan Lomax came down South thinking to record Robert Johnson for the Library of Congress, only to discover Johnson had been dead for three years. Instead he was pointed towards Waters who played a similar style of bottleneck slide as Johnson.

It wasn't until Waters moved up to Chicago in the mid 1940's that his career took off. He is now considered the father of the Chicago Blues sound that was the basis for most of the hard Blues/Rock that's come out in the years since. Bands as diverse as Led Zeppelin and AC/DC have all pointed to Waters as a primary influence, and the grand daddy of British Blues bands, The Rolling Stones, took their name from his song "Rollin' Stone."

Like most of the greats from those early Blues eras, he was usurped by those who came after until he was "rediscovered" in the first roots rock revival of the 1970's. Between then and his death in 1983, he produced four albums re-working his best music with people like Johnny Winters, Levon Helm, and Garth Hudson. Of these, the three Johnny Winter-produced albums are considered seminal Muddy Waters.

The two-disc set. They Call Me Muddy Waters, features recordings from both highpoints of Muddy's career, 1940's –50's Chicago and the late seventies "re-discovery" era. Disc one features all his great hits as they were originally recorded for Chess Records with a line up including Buddy Guy, Willie Dixon (who also produced many of these early recordings), James Cotton, Junior Wells, and Little Walter.

On disc two, we fast-forward twenty years to a live concert in Poland where he and his band from the Johnny Winter recordings run through some of the same material, but primarily it includes the hits left off the first disc. What's truly amazing, aside from the obvious improvements in technology, is that the quality of the recordings is identical.

The energy and the passion of the man hadn't changed an iota. His voice rings with the same authority in 1976 as it did in 1956 when he was burning up Chicago. There's nothing tired about his renditions of songs he'd probably performed thousands of times before; in fact there's a certain freshness that comes about from live performances that might have been lost in the studio.

Sometimes going back and hearing a performer's original recordings can be a disappointing experience. Either the sound quality is bad because of the time period they were made in, or they aren’t able to reproduce in studio what they could accomplish later in life on stage. That is definitely not the case with Muddy Waters or his recordings.

The quality of the recordings is great and the digitalization process has managed to capture every last little nuance originally laid down by these great musicians. At the same time, Muddy had already had enough life experience to give these songs an authenticity that would have been lacking in a younger man's performance.

He can sing about events, life, love, and death with authority, having experienced all of them in some form or another. Although I have a feeling his voice would have had those ringing tones even when he was a younger man, that quality is only substantiated by the years its seen.

On his most recent album, Crow Jane Alley, Willy DeVille has a song called "Muddy Waters Rose Out Of The Mississippi Mud," which even if you were inclined to take literally as being about the river flooding from the title, once you listened, it was obvious the song was about somebody. Not just anybody either, but somebody pretty damn special from the way Willy sounds when he's singing.

Special is the right word for the Muddy Waters Willy describes as rising out of the murk of the Mississippi river. Listen to one track of Muddy singing the Blues and you hear exactly the connection that Willy is talking about. Muddy's voice was born out of the earth that was the Deep South of the United States in the twenties and thirties. Even though he recorded all his music up North, the experience of living that life was reflected in the passion and soul of his Blues music.

They Call Me Muddy Waters gives the listener an opportunity to experience that well of passion and see how it was sustained for the entirety of Muddy Water's career. This is a great retrospective of one of the most important Blues singers of the twentieth century.