Two verismo classics from the Metropolitan Opera are under review.

I must confess that after writing about some of the earlier albums in the Sony Classical series of remastered archival Metropolitan Opera broadcast performances, I was very much looking forward to their release of the 1964 broadcast of what is perhaps the most popular double bill in the world of opera—Mascagni’s Cavalleria Rusticana and Leoncavallo’s Pagliacci. I was not disappointed.

The Met broadcasts of the ’50s and ’60s featured the best of the operatic voices of the middle of the 20th century, indeed some of the finest voices ever. And this series keeps them singing for future generations. 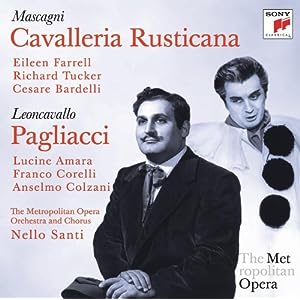 As of now, the series has included 25 broadcasts of some of the greatest of operas, highlighted by some brilliant performances. In addition to the current release of the verismo double bill, Sony is also releasing a 1962 broadcast of Verdi’s Ernani with Leontyne Price and Carlos Bergonzi, and a 1968 performance of his Luisa Miller with Montserrat Caballe in the title role. A 1966 broadcast of Donizetti’s L’Elisir D’Amore starring Bergonzi and Roberta Peters rounds out the current set of releases. Thomas Schippers conducts the orchestra and chorus in the Verdi and Donizetti, while Nello Santi conducts in the Mascagni/Leoncavallo.

Cavalleria Rusticana features Met regular Richard Tucker as the heartless Turridu. Tucker had delivered memorable performances in the series’ Carmen and Les Contes d’Hoffmann. Eileen Farrell is the doomed Santuzza in what was her last Met Broadcast. Tucker has a golden tenor that always seems spot-on from his first aria “O Lola, ch’hai di latti cammisa” to his exit, crying out to his mother.

Farrell’s beautiful soprano soars with the chorus in the stirring “Regina Coeli” and her duets with Tucker are masterful. Her duet with Alfio (Cesare Bardelli) before the iconic intermezzo is powerful. Lili Chookasian is Lucia; Mildred Miller is Lola, and of course the magnificent Metropolitan Opera Chorus rounds out the cast.

Franco Corelli sings Canio, the stricken clown in Pagliacci, and Lucine Amara, who had sung with Tucker on the Hoffmann broadcast, is Nedda, his faithless wife. Corelli has the kind of rich tenor that can give an audience chills, and he lets it all out in this performance. He opens “Un tal gioco, credetemi” with what seems like effortless power. “I Zampognari” is a treat, and his “Recitar—Vesti la giubba,” perhaps most often associated with Caruso, is thrilling.

Amara’s “Stridono lassu” is a study in elegance, and her duet with Anselmo Colzani’s Tonio, “Sie la?—So ben che difforme” is filled with drama. The rest of the admirable cast includes Franco Ghitti as Beppe, and Calvin Marsh as the lover, Silvio. Joseph Folmar and Lloyd Strang are the villagers.

These are fine productions of two of the best known pieces in the operatic repertoire. Awhile back in reviewing Sony Classical’s release of the Met’s broadcast of La Boheme, I asked why another La Boheme when there were so many wonderful productions available already. One might well ask that same question about this current release. My answer then was simple: There is never too much of a good thing.

This new staging of the “timeless tale” of "Eugene Onegin" is younger, “sexier,” flashier than its predecessor. It works – and it doesn’t.