One hour of an excellent blend of rock and pop with solid singer/songwriter underpinnings.

Lennon's major label debut album had the misfortune of being released on September 11, 2001. With the country focused on other things, the album didn't get much attention and she was later dropped from Arista. Undaunted, Lennon has continued to pump out an excellent blend of rock and pop with solid singer/songwriter underpinnings.

Most of Damaged Goods leans towards darker sounds. The album is a lengthy collection of songs dealing with tragedy, mainly on a personal level. "Goodbye" is one song that steps out from this and provides, at least musically, a hint of hopefulness. The lyrics capture a moment in time near the end of a relationship when the protagonist realizes that they cannot be who their lover/friend/relative wants them to be. While the lyrics are a bit disparaging, the music and hook indicates a looking forward to when the pain of the moment will fade into memory.

The rhythm of the album flows effortlessly from introspective and dark ballads to head nodding guitar-driven rock. One song that sends this listener into rock ecstasy is "Nothing Out of Me." It leads out with pounding snares and chunky electric guitars, and then shifts into a hooky chorus that has just the right amount of anguish. The momentum shifts down to poignant at the last verse with just vocals and percussion. Then the guitar is added in and leads into one last driving chorus. 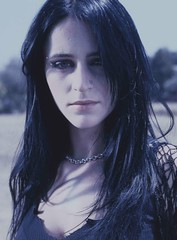 Along with the solid songwriting, Damaged Goods is blessed with a tight studio band. The songs themselves are stereotypical of their genres, and it is the production and execution that makes them shine. In addition to writing (or co-writing) all seventeen tracks and singing the lead vocals, Lennon plays the piano on several. The piano has the potential of turning a good rock album into something that will forever be compared with Tori Amos, but in this case the producers smartly incorporated it in only sparingly and where appropriate.

The lead track ("No One Knows") begins with a bit of piano and vocals, but then ramps up into full-on rock with muddy electric guitars and aggressive vocals. "Finish What We Start" is a mostly piano-driven tune, and one of the more introspective ballads on the album. After ten tracks of drums and guitars, it is almost like finding a quiet corner away from the party to catch your breath and regroup. None of the energy and momentum of the album is lost on this track; merely, they are put on hold while allowing the listener to revel in the beauty of Lennon's voice.

Lennon is currently touring with Aerosmith and Mötley Crüe, and if Damaged Goods is any indication, I have no doubt that she will be able to hold her own.