These songs aren't the prettiest you're ever going to hear, but they're probably some of the most realalistic.

I can remember first hearing Blues music during the minor revival of interest in the mid-seventies, just before the Punk Rock explosion. However, there weren’t many clubs playing it, except for coffee houses playing some folk blues, and the occasional house band that played Chicago-style electric blues.

The only other time you got to hear the Blues was the occasional concert by someone like B. B. King, or at folk festivals where they'd bring out some acoustic Blues player who had authenticity and not much else going for him. Worst of all were the times the rich rock stars would feel guilty about not giving back to where it all started.

They'd haul out someone like Lighting Hopkins on stage to sing a couple of songs and that would be it. Everybody would clap and cheer and the rock star would go off in his big limo to whatever fancy hotel he was staying in, and the blues musician would go off to whatever cheap hotel he was living in. Okay, so that's probably a little bit of an exaggeration, but I would get the feeling that something really important was being allowed to fall by the wayside.

Since that time, there has obviously been another resurgence of interest in the blues. Perhaps it was the emergence into prominence of players like Bonnie Raitt followed by the success of movies like Oh Brother Where Art Thou? that brought about the increased popularity of traditional music. When that was combined with the inevitable backlash against the ever-increasing reliance on technology by so many contemporary performers the 1980s and 90s, times were ripe for a renaissance of what we now call roots music.

Fortunately, there were still some of the original players around who could finally cash in on their talents and newfound popularity. For the Black musician in the 1950s, making money from the music you wrote was fraught with difficulties (like discovering the record deal you signed also sold your ownership of all the material recorded – meaning you never received a penny in royalties) and so many of them fell by the wayside, victims of poverty and despair.

One of those who made it and managed to have a successful second career was John Lee Hooker. John Lee was born anywhere between 1912 and 1917, which is a huge difference but also reflects the carelessness with which records were kept for Black people in the South. At best, births would be registered at baptism, but with illiteracy being commonplace, it was rare for written records to be kept of anything. 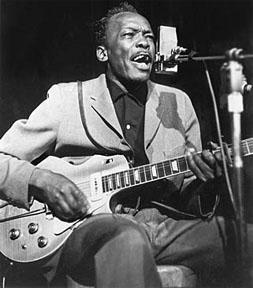 His early years sound like the songs he sings; he was the son of a sharecropper and part time preacher with ten brothers and sisters. When his parents split up in 1926, he stayed on with his mother and it was his stepfather taught him guitar, especially the blues.

His stepfather, a musician, spent time with other musicians. Young John Lee was rubbing shoulders with people like Blind Lemon Jefferson, Charley Patton, and Son House as he was learning the Blues. Like so many other Black people of that time, John headed North in search of employment when he was a young adult. Instead of Chicago, which lays claim to being the home of urban blues in post war America, Hooker ended up living and working in Detroit.

He established himself as a solid solo act playing and singing his own distinct style of Delta Blues. His way of singing hearkens back to the old "holler" songs the field workers would sing while working for the masters of a plantation. Instead of words strung together as a tune, they would chant out their litany of woes or joys while keeping a steady beat with whatever was available for accompaniment. (For more about holler songs see Broadcasting The Blues: Black Music During The Segregation Era and the book of the same name.)

Hooker chanted his lyrics in chunks of prose, as opposed to poetry, over an improvised rhythm he would pluck out on his guitar using his thumb for the basic notes and his finger to pluck out the higher strings. After he put out a string of successful songs in the late forties and early fifties as a solo act, Hooker finally made the trip across the border to Chicago where he began to work with a backing band.

At first, he ran into problems having to work with other musicians as it cramped his improvisational style of performance. Nevertheless, he soon learned to adapt his style to accommodate other players and continued his early success. During the sixties, he was able to cash in on the folk revival by utilizing his one-man show persona, but the demand for the more traditional types of Blues was on the wan and soon dried up altogether.

After more than a decade of no new John Lee Hooker releases, The Healer – featuring Hooker and various contemporary musicians like Bonnie Raitt and Ry Cooder was released in 1990, and thus marking the beginning of his second career, which would last until his death in 2001. Ironically, it was during these last years of his life that he achieved the most renown winning Grammies, getting a star in the Hollywood Walk of Fame, and being inducted into the Rock and Roll Hall of Fame.

It was almost as if the music business was trying to make up for fifty years of neglecting Black artists by pouring heaps of recognition upon one of the few surviving members of the fraternity. After all these years of playing and struggling, John Lee Hooker's style of Blues music was being heard and recognised by more people in a short space of time than had heard it during his whole career to that point.

A new double CD release of John Lee Hooker's recordings from the Detroit era, King Of The Boogie, captures the sound perfectly. A few tracks feature some sparse accompaniment but primarily we are listening to the man himself ripping through the familiar "Boogie Chillen," "Boom Boom," and less well know pieces like "Do My Baby Think Of Me?"

No matter the song, this collection captures the essential components of what made a Hooker song such a unique experience as compared to so many of his contemporaries and those who would follow in his footsteps. Ry Cooder referred to him as "the last of those unstructured, free players", meaning that his music still held true to its rawest and most essential elements.

Close your eyes and listen to the songs on King Of The Boogie and let yourself be caught up in the power of the hypnotic rhythm of the guitar and the continual flow of words accompanying it. If you listen carefully, you might even hear the sound of cotton being picked or the water lapping at the nearby docks where someone's sitting fishing for whatever might live in the mud of the Mississippi River.

If, like me, you've waited and wanted to hear something other than what's promoted as the Blues on a regular basis, or have felt something has been missing from the recordings you have heard, then this collection is for you. John Lee Hooker, King Of The Boogie answers the question of where is the diversity in blues music? But hold on to the discs for dear life, as no one else seems to have come along to fill his shoes and take on his unique style.

John Lee Hooker isn't flashy or stylish; you're not going to get any searing bottleneck guitar solos on one of his albums. What you will get are songs straight from the heart of the Delta – undiluted and unfiltered. Hard-edged and rough like the life led by the men and women who eked out a living under conditions not far removed from the slavery of their parents and grandparents, these songs aren't the prettiest you're ever going to hear, but they are probably some of the most realistic.