This album is a tasteful blend of soulful vocals with Americana instrumentation and arrangements that are guaranteed to not disappoint.

As one of the icons of the late 90's Lilith Fair cadre of female singer-songwriters, Joan Osborne came to national attention through her soulful vocals and contemplative lyrics. Pretty Little Stranger is her first album of original music in six years, and this time around she is exploring her roots with a collection of country songs.

Born and raised in a small town outside of Louisville, Kentucky, Osborne had not really explored country music until she moved to New York City for film school. While her songwriting in the past has drawn on country and soul music, she says it was far more challenging to focus on the direct simplicity of country and not get sidetracked by abstract imagery.

The album is a collection of original tunes, either written by Osborne alone or with co-writers, and classic songs written by renowned songwriters such as Jerry Garcia, and Roy Orbison. Osborne is able to pull them all together and build a cohesive album that retains an intimate connection with each song, whether they are her own or not. 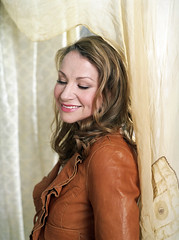 Taken out of context, Pretty Little Stranger can be a bit of a shock to listeners who are expecting an album like 1995's Relish. The country emphasis of the album finally sinks in about half-way through with Osborne's interpretation of Kris Kristoferson's "Please Don't Tell Me How The Story Ends." Dan Tyminski's vocals add just the right amount of high lonesome to the song.

On the whole, the album points in a different direction from Osborne's 1990s hits, but there are occasional hints of the style that set her apart from the flood of solo female vocalists of the time. For example, "Shake the Devil" is reminiscent of "St. Teresa" or "Pensacola," but the banjo skirting around the edges ties it back into the country/roots/Americana theme of the album.

Along with Tyminski, Pretty Little Stranger gets quite a bit of help from accomplished Americana musicians. Bluegrass chanteuse Alison Krauss provides a hint of backing vocals on "Holy Waters," and Vince Gill gives his vocal blessing to "Time Won't Tell." With Eddie Bayers on drums, Michael Rhodes on bass, and Steve Gibson on electric guitar, the core rhythm section of the album provides an appropriately balanced stage to showcase Osborne's vocals. Kudos to producer Steve Buckingham for making sure the background stays there and does not overwhelm the focus of each song.

There is not a single dud among the twelve tracks of this album, making it well worth the sticker price for Americana fans and others who appreciate good music of any genre.

Mantis is a delicate balance of aggression and modesty, much like the mantis shrimp which hides in crevices and leaps out to strike.