The band's first independent release in over 20 years is a breath of fresh air.

It has been fifteen years since I was first introduced to the Indigo Girls through their Rites of Passage and Swamp Ophelia albums, and in those fifteen years, I have come to accept that they will never make another album like those two. The moods of those two albums were warm and resonant, kind of like being nestled inside of a finely crafted acoustic guitar. They sang with tight harmonies, and the lyrics were fresh and new.

Fifteen years, and both the band and I have grown and changed. Now they write about love and relationships from middle-aged experience instead of the fiery passions of youth. The outrage and call to action that fueled many of their early songs is still there, but more likely to be delivered with a road-worn weariness and a touch of pessimism. As for me, I've learned to approach each new album as if it's not coming from the band that provided the soundtrack to my college years, but is instead some new creature as yet unknown to me.

It was with that approach that I, after hesitating for several weeks, finally listened to the advance release of the new album, Poseidon and the Bitter Bug. Prognosis: it's not as bad as my inner fangirl was afraid it would be. 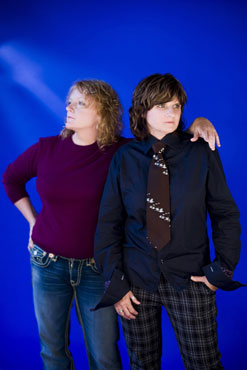 That's not exactly high praise, but frankly, after the comments Emily Saliers made during a live show I saw last year, and how unimpressed I was by the two new songs they performed in the set, I was afraid we'd get another over-produced, disjointed album like Shaming of the Sun. Pre-release press and comments from the band indicated that they planned to do two versions: one with a full band, and one acoustic with just the two of them singing and playing guitar or piano. Purportedly, this was to appease fans who have been disappointed with how the songs transitioned from the duo version commonly heard live to the band version on the recordings.

Surprisingly, the band version of Poseidon is not a full-on pop/rock fest like their last release, Despite Our Differences. There are a few tracks that are clearly geared towards being radio-friendly singles ("Love of Our Lives," "What Are You Like," and "Ghost of the Gang"), but for the most part, the band sticks with more minimalist arrangements that highlight the work they have put into crafting these songs.

Saliers and bandmate Amy Ray have a long-standing tradition of not collaborating during the songwriting process; they write separately and then collaborate on arrangements. Ray has also found a solo venue for her music that doesn't quite fit as an Indigo Girls song. One track, "Driver Education," was previously recorded that way and released on Ray's second solo album, Prom. The Indigo Girls version is a bit more mellow, but for the most part it retains the sun-washed reminiscences that characterized the song in its first incarnation.

As I expected, for the most part, I prefer the acoustic version of Poseidon. Stripped of the things that so often distract from the melody and lyrics, I am better able to connect with the songs. For example, the laid-back R&B styling of the percussion and keyboard in the band version of "Digging For Your Dream" become the focus of the song, whereas the vocals (and by default, the message) take center stage in the acoustic version: "Every day that you get up will force your cards / Playing your story in fits and starts / Take your prospects and your pickaxe and you trudge down to the stream / Then you bloody your hands digging for your dream"

While Saliers may be drawing in more R&B and country flavors to her music, Ray is still firmly in the rock 'n roll world. For example, just one listen to her song "Let It Ring" (on the Prom album), and you will learn just how a mandolin can be turned into a punk instrument. I think it may be the chord progression, or possibly even elements of the melody, but something about one of Ray's songs on Poseidon ("True Romantic") keeps reminding me of "Creep" by Radiohead. Now that's a mashup I'm looking forward to hearing.

Poseidon and the Bitter Bug is the Indigo Girls first independent release since 1987's Strange Fire, and already it is heads and shoulders above the albums released in the last few years of their Sony/Epic contract. If this dual-release format finds a home in the hearts of other fans as it has in mine, I foresee many more such recordings in the future.