Knight blasts the unfairness of life through stories of small-town and rural hopes and dashed dreams.

Anya Singleton, Not Easy to Forget

Anya Singleton is equally comfortable singing jazz, blues, R&B and even rock; her new EP could be described accurately both as a small smorgasbord of styles and as a delicious, sultry concoction of well-crafted original material perfect for her style. Her voice is passionate but knowing, more warm than cool, and she puts her excellent technique in the service of the song – not the other way around, as jazz singers sometimes do.

However, to my ear, the most enjoyable thing about this EP, along with Singleton's delivery, is how the original songwriting (by Singleton, guitarist Michael Aarons and keyboardist David Sherman) is so heavily indebted to classic R&B and soul. "I'm Just Fine" is a timeless kind of song in the classic soul tradition, while the title track sounds like one Aretha Franklin could easily have recorded in the 60s. Sherman's "Slow Man" brings to mind Carole King, while his "Silver and Gold" has an silky Elton John sort of melody. But with all that, the jazzy flavor of the arrangements gives the songs an earthy, acoustic edge they might not have otherwise. The group breaks into more traditional jazz with a solid but unexciting version of Hoagy Carmichael's "The Nearness of You." It's the originality on display in the other songs that makes this short set special.

Extended clips can be heard here.

Like an angry John Mellencamp, Chris Knight blasts the unfairness of life through stories of small-town and (especially) rural hopes, and the dashed dreams that too often bring them down. Knight lacks the subtlety of some similarly character-driven songwriters like Springsteen and Dylan, but subtlety isn't his aim; hoarse passion and evocative imagery give this pissed-off holler of an album its force. Knight's originality, in the context of heartland rock, lies in his advocacy of the small farmer rather than the suburban hard-luck case or union laborer. His axe hits squarely: "I watch them tear it all to hell/What used to be my church/Tearing up my Grandpa's land/Treating my Grandpa's land like dirt." But there's defiance, too, in grainy tales like "William's Son," a highlight of his powerful live show: "And every now and then I kneel and pray/That things will get better one of these days/But I'll spit in your eye and stand my ground/Just to keep my head from hanging down."

Producer Gary Nicholson, who has worked with everyone from Etta James to George Jones, makes the CD sound both perfect and real, and he and others have some co-writing credits. But this is Knight's show, the product of one man's skilfully honed, often damning vision. 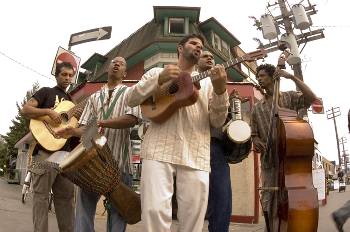 Toronto-based reggae-calypso band Kobo Town, brainchild of Trinidadian singer, songwriter and bandleader Drew Gonsalves, is named for the old Port-of-Spain neighborhood that birthed traditional calypso. Though the band's sound is best described as pan-Caribbean, its inspiration and subject matter have firm roots in the history of Gonsalves's native land, of whose turbulent history he speaks with poetic specificity and force.

In "Trinity" he looks down on the land from an airplane: "Her clothes were torn, and her shirt was all tattered/Her eyes downcast, every hope and joy scattered/Dream of my past, bright memory shattered/but I adore her still 'cause I know that all that don't matter." In other songs ("Abatina," "Beautiful Soul") he focusses closer in, examining the lives of individuals. And in "Blood and Fire" he casts his eye on the wider stage of the whole suffering world: "From Gaza to Jaffna, blood and fire/Soweto to Rio, blood and fire…What must fall to be free, blood and fire."

But Gonsalves and his able eight-piece band couch the messages in bouncing beats that elevate the spirit. Flute and violin lines slither through the clever arrangements; Gonsalves himself handles the guitar and cuatro; and Kellylee Evans contributes some laserlike guest vocals. Fans of Caribbean music, world music in general, and meaningful songwriting should grab this CD when it's released next month (check this space for an announcement) – it's a beauty.

OUT AND ABOUT: You can read a little about my trip to Nashville here. Since then I've been more out like a light than out and about. Zzzz… wake me up when the Foley scandal is over.