Abbie Gardner's new roots-blues release is as rich and sweet as the honey in the title.

First up this week is Abbie Gardner, who, after I talked about her in an earlier column, was kind enough to send me her CDs. Then I survey some of the best bands on the Long Island, NY blues circuit. Thanks go to the Downstate New York Blues Association for introducing me to some of these bands, as well as helping to create the scene where they can develop and thrive.

Abbie Gardner, Honey On My Grave

Abbie Gardner's new roots-blues release is as rich and sweet as the honey in the title. Her dobro and guitar playing is assured, her voice naturally gorgeous, and her singing a completely organic-sounding synthesis of dusky blues, jazzy sexiness, and vibrato-free folk tones. The mostly self-penned songs range in style from the sly country-blues of the title track and the simple folk beauty of "One Love" to the bluegrassy "Ohio" and the bawdy novelty of "Caffeine."

"Sweet Georgia Pines" is pretty – it's hard to imagine Gardner doing anything that isn't – but a little too self-consciously homespun for my taste, while "Dreams" is a bit syrupy. But those aren't major flaws. Her bluesy versions of "Ain't Misbehavin'" and "Hit the Road Jack" hark back to her jazz background. Finally, if the duet with Pat Wictor on the traditional "You Got to Move" were any more elemental, it would be just a bunch of hydrogen atoms. 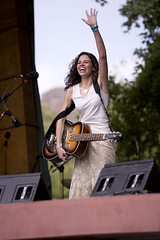 Gardner, who is also a member of the Americana trio Red Molly, recently took third place at the Rocky Mountain Folk Festival Song Contest, and those mountains are pretty high, so I guess third place is excellent. In any case, this CD – engineered and mixed by the redoubtable Mic Rains – wins a place in my iTunes library.

Breakaway, Live at The Viking

For some cookin' Chicago-style blues, you can't go wrong with Breakaway, one of Long Island's premiere blues outfits. The two-guitar attack by co-leads Lou Carrollo and Howie Haber, along with sophisticated songwriting, make Breakaway stand out. Guitar fireworks burn up the stage in the long jams "Down the Line" and "The Bottle," while the duo's writing skill is on generous display in the slower, more emotional songs like "Everybody's Talkin'" and "Get Out and Love Somebody." And don't miss the wailing piano solo from guest Tommy Keys on the crawlin' "Gambling Man on a Killin' Floor." While not a replacement for a live show, this CD is a good taste of Breakaway's powerful kind of blues.

As a native Long Islander, I love to see when a great original band develops out of the Island's tired classic-rock cover band scene. I use the term "original" for the Dog House Blues Band not because they do their own songs, but because of their creative approach to putting together their sets. Fueling their excellent musicianship and good-time energy is a knack for finding wonderful obscure blues songs which they arrange tightly and inventively and make their own. These, combined with a smattering of more familiar blues and blues-rock covers, make Dog House more deserving of the term "original" than many bands that write their own material.

Their new, cleanly produced studio album (not yet available online) shows the band having just as much fun with Willie Dixon's "When the Lights Go Out" as with the Beatles' "Oh Darling." If you're in the area and looking to have a great time with a live band, it would be hard to do much better.

The latest, relatively mellow CD from Joe Vicino & The Smokedaddys follows the Eric Clapton tradition, with a lot of lyrical writing and a smaller amount of rockin' blues. Guitarist and singer Vicino, who writes the material, shows his sensitive side in songs like the title track, as well as in instrumentals like "Josephine" and "Before You Close Your Eyes," dolling them up with the silvery, almost pastoral, yet intricate guitar solos at which he excels. His trio rolls out rocking Chicago and Southern electric blues like "You Got It Going On" and "Texas Bound," while just as comfortably slowing down for numbers rooted in country blues like the Robert Johnson-inspired "Squeezetoy" (with guest Kerry Kearney on slide guitar) and the swampy "Delta Town." "Black Cloud Blues" has a Stevie Ray Vaughn smoothness, while "Scofflaw Blues" shows off Vicino's slide mastery.