A sonic and spiritual journey.

In which an American masters a traditional Japanese instrument; American singer-songwriters keep doing the same old thing, but really well; and Whisperado, the self-proclaimed Greatest Band in the World, sends an emissary to the wonderful wilds of upstate New York.

Song of the True Hand is the first CD from the first woman to be certified a Grand Master of the shakuhachi. Elizabeth Reian Bennett's mastery of the traditional Japanese bamboo flute is evident in every moment of this fascinating hour of music. No recording can replace the experience of sitting in a room (living room, concert hall, cockroach-infested basement, it doesn't matter) listening to a live shakuhachi performance, but Bennett's haunting, sliding tones and seemingly infinite variations in attack, volume, and breathiness are quite capable of taking the listener on a deep sonic and spiritual journey even through a pair of stereo speakers. 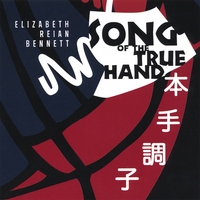 It's no accident that this hoary instrument (it may date as far back as ancient Egypt) has been a substitute for Buddhist chanting as sui zen ("blowing zen"). Shakuhachi music can be both meditative and emotional, somatic and abstract, and Bennett makes her selections from several traditions, playing compositions and arrangements from modern times as well as centuries past. She includes a "modernistic" work that bends western melodies to the purposes of the shakuhachi, and ends with an improvisation rooted in her 25 years of immersion in the ancient monk pieces. The patent-pending Indie Roundup cost-benefit music index indicates zero downside to buying this CD, and, especially if you've never heard a shakuhachi, you're in for a treat.

Gregg Swann, Everybody's Got To Be Somewhere

Gregg Swann make delicious power-pop with a punk snarl swirled in. He records his raspy tenor low in the mix, but one quickly gets used to that, and it ends up actually making the melodies more powerful since you have to listen a little harder for them. Artful harmonies frequently sneak in to the clean, uncluttered arrangements. The songs are brief and to the point, and every single one has a real hook – I kept waiting for the filler, but there isn't any. Highlights include the mid-tempo "Let Me Get This Straight" with its piano and banjo; the two-minute kick in the butt "Darkness is Cheap" which opens the CD with a bang; the Kinks-like anthem "Hollywood"; and the Americana-leaning "Unremind Me." But you could sing along with all ten. Swann's lyrics are as straightforward and well-crafted as his tunes: "When the day is just a sigh/And you're cold, you don't know why/Don't be afraid 'cause when it's through/The truth hurts, but not as much as it used to." His meaty guitar work serves the songs well, and the always tasteful and solid drummer Ethan Hartshorn anchors a tight group of backing musicians. (Full disclosure: I've worked with Ethan.) This CD is a real find. But crank it up loud to get the full effect.

Nathan Angelo, Through Playing Me

If you're a fan of blue-eyed soul, Atlanta's Nathan Angelo is well worth a listen. Hitting the piano like Randy Newman, working his smooth vocals and flowing melodies like Stevie Wonder, crafting dense arrangements like Don Henley, and wrapping emotions around emotions like Kevin So, Angelo has a timeless adult sound that could find a wide audience. As you move through this long CD, great songs like the wry, bouncy "Love Sucks" and the epic title track give way to some in which wall-of-sound bombast threatens to outweigh substance, but even the weaker material is interestingly complex and sweet to listen to. The dramatic "Leigh," for example, seems to owe something to Coldplay, and "Road Home" is pretty even if there isn't much to it. In songs like the romantic "Someday Soon" and the verging-on-prog-rock "Twilight" Angelo and his collaborators create entire little worlds.

He doesn't have the vocal power of some of his predecessors in the genre, but he's got good control and seems to know, for the most part, how to make the most of his instrument, which includes a supple falsetto. The lyrics, which deal with common themes, are well crafted to fit the music, gluing together common images, terms and phrases with just enough art: "It gives us hope/It gives us faith/That life won't always be this way/To change the world/To seize the day/Dreams don't have to fade away." And he and his co-writers do get more inventive at times, as in "Mary Poppins' Birds" which is about getting ahead versus what's really important in life: "I cannot forget about Mary Poppins' birds/Haven't you heard/They need some food not just smiles and words… Everytime I think about it, Mary Poppins' Birds/Reminds me of the words, 'you gotta give to love' y'all." Amen, brother.

OUT AND ABOUT: Your intrepid reviewer is taking the music of Whisperado on a mini-tour to the Finger Lakes region of upstate New York this weekend. Wish me luck on my first ever solo tour.