American world? Sure. This week we feature music from artists who, although based in the US, make music that breaks boundaries and feels like it’s built from colorful, jagged pieces of the whole world.

A jazz concept album about birds – not Charlie Parker, but actual birds – sounds potentially pretentious, or precious, or both. But this disc, from singer Susan Krebs, musical director-pianist Rich Eames, and some ace sidemen, is actually a sweet, sincere, unprepossessing, and lovely set of bird-themed tunes. Most of the tracks could stand alone, but the set also flows together like a flock of – I don’t know – some kind of flocking bird.

There are well-known songs, like “Skylark,” “A Nightingale Sang in Berkeley Square,” the Beatles’ “Blackbird,” and, in a nod to Bird with a capital B, “Ornithology.” There are more obscure songs, like Abbey Lincoln’s “Bird Alone” and Krebs and Eames’s original, meditative tune “The Peace of Wild Things,” which faintly echoes “‘Round Midnight” and features some beautiful flute playing by Rob Lackart. And there are surprises, like Ralph Vaughan Williams’s “The Lark Ascending,” which the musicians give a reverential, meditative treatment, aided by a string section.

A few tracks feel a little icy and overly careful, but Krebs and Co. hit the mark far more often. One of my favorites is their epic take on Dave Brubeck’s “Strange Meadowlark.” Another is “Bob White” with its herky-jerky rhythms.

Krebs is not the most powerful or adventuresome vocalist — she sings with what I think of as a shy artistry with a touch of humor. The latter comes into play, for example, in Hoagy Carmichael’s “Baltimore Oriole,” and in the medley of roots and pop (non-jazz) standards that starts with Hank Williams’s “I’m So Lonesome I Could Cry.” My biggest beef with jazz vocalists is that they frequently lack a sense of fun. Not so here. The “twinkle” in Krebs’s delivery is an important part of this disc’s appeal. So are the little throwaways – quotes from poems, recorded bird sounds, percussion sound effects – that dot the tracks.

Sample all tracks and purchase the CD at CD Baby.

Here’s a band that wears its heart on its sleeve. One World’s new disc contains an hour of jazzy Latin adult contemporary tracks, touched by rock and funk and soft pop, most sung in English. It’s all very smooth, but loaded with good cheer, and has plenty of melodic hooks and rhythmic bounce to keep you on your toes. There are sad moods (“She Longed For His Love”), but One World’s one world is one world without anger and meanness. Check out some sample tracks from this great party record.

N-Side, Just a broke brotha’ tryin’ to come up!

It’s easy to dig jazz poet N-Side. He’s chill. He’s solid. He speaks his poems as neither an angry young man nor a self-satisfied old one, but as a literary artist. As a result he makes you really pay attention to his lyrics. “People wait for me to get fed up, frustrated – hate-filled with aggression, preparing myself to throw down. / But those folks rich in spirit have taught me force isn’t needed to keep this prize called knowledge around.” N’s poems – some rhyming, some more freeflowing and prosy, but all engaged with the complete human experience – are backed by Ricardo Love’s nu-soul grooves and organic hip-hop beats decorated with small splashes of jazz. (Two tracks are by Russell Case.)

The tracks rest in easy grooves that match the poet’s calm intensity as he talks to people we can’t see or hear, but whom he makes us envision clearly. “Someone said… they had no culture here and neither did I… ‘Can you lay claim to an original thought of your own?’ / I loaded up with all the names that I was about to call him: sellout, racist, double agent, cultural perpetrator, antebellum negro, no-risk vicarious activist… but I didn’t say a word… finally I… realized once again, I was talking to myself. / Hopefully these type of conversations will change, and not be taken so personally.”

Deep and useful stuff. Sample all tracks and purchase the CD at CD Baby.

Finally, here’s a pic of Stratospheerius, the “full-on electro-fiddle-trip-funk” band whose CD I reviewed back in July. They rocked the legendary Bitter End last night with an all-too-short early set. 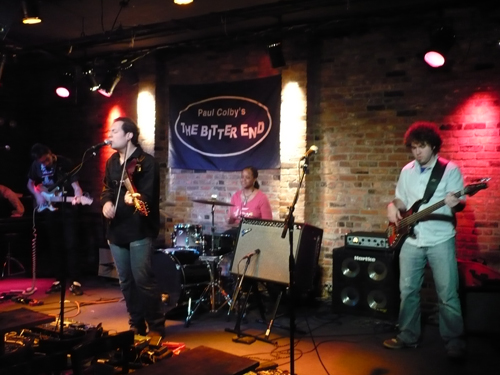 It’s good to know that some things, like the Bitter End’s tiny bathrooms, never change. But electric six-string violinist Joe Deninzon (who was born in St. Petersburg, Russia) leads this most excellent band through some serious rhythmic changes. Is it prog-rock? Jazz fusion? A jam band? Ask the portraits of Bob Dylan and Joni Mitchell on the walls, I don’t know. A little of each maybe. All I know is it’s kickass. They closed the set with the instrumental “Heavy Shtettle II: Heavier Shtettle.” I said kickass, right?

Here’s a bonus shot of drummer Lucianna Padmore in action. She is an even more awesome musician in person than on CD. 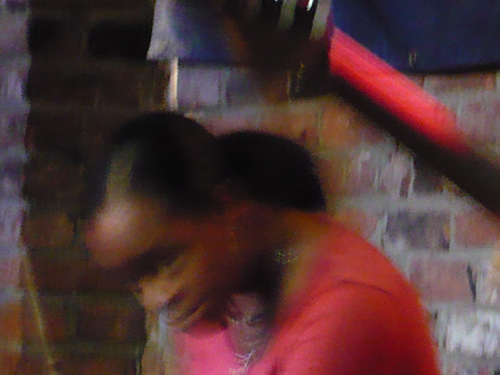