Newfoundland folk band shares some of their favorites from the vast collection of traditional tunes from the region.

Music Review: Great Big Sea – The Hard and the Easy

Newfoundland-based folk trio Great Big Sea (Alan Doyle, Bob Hallett, and Séan McCann) have been performing together for nearly fifteen years, and in that time they have recorded eight albums that feature a mix of original compositions and traditional songs from the Newfoundland area. The variety of oral and musical cultures that make up modern Newfoundland is a source for thousands of songs, and for their ninth album, The Hard and the Easy, the band decided to display some of the gems.

In addition to the exquisite recording and production work fans have come to expect from the group, the album includes a DVD that features each of the songs introduced by a member of the band and then performed in a casual setting, either on the back deck of a house, or in a living room party with friends and family.

I watched the DVD after I had listened to the album several times, and although some of the content and implications of the songs had sunk in by that point, the explanations and back story added so much more to them. I would almost recommend that listeners watch the DVD first, but the performances on the CD are better, so instead I will recommend that they watch the DVD after the first listen through. 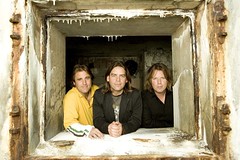 The first track on the album is one of the more memorable tunes, and according to Bob Hallett on the DVD, it's a song that will guarantee that the singer be remembered as the one who sang it at a party. Variations on "Come And I Will Sing You (The Twelve Apostles)" have been around since medieval times. It contains Christian and Pagan imagery, and there are versions in both Hebrew and Arabic. It might remind the listener of the lyrical arrangement of songs like "The Twelve Days of Christmas," but it is not merely a holiday song. I like it because of the percussive nature of the lyrics sung with a light Newfoundland accent, and it makes a good introduction to what is to come on the album.

The Newfoundland musical tradition is chock full of songs about the sea, and on this album, the listener will find that at least six of the songs make reference to the sea or are outright sea songs. In addition, both "Concerning Charlie Horse" and "Tickle Cove Pond" deal with horses that have fallen into ponds because the ice was too thin. "The River Driver" is also about the relationship between a man and a body of water.

The songs on The Hard and the Easy range from the sentimental and sweet ("Graceful and Charming") to lighthearted and fun ("The Mermaid"). In fact, it is the latter song from which the image on the cover is taken. One thing that the listener/viewer will take away from the DVD portion of the album is that the band has either a sentimental connection to the songs or simply has so much fun performing them that they wanted to share that joy with everyone. In that, they have succeeded.