Few musicians are able to create the atmosphere of a summer album. Glaser is one of them.

Prior to college, my meager music collection consisted of a smattering of Christian rock and pop albums, with a few notable exceptions such as The Proclaimers and Wilson Phillips. In college, my musical horizons were opened up when I first heard the sounds of the Indigo Girls' album Swamp Ophelia wafting from one of my hallmates' room in the dorm. From that point on, I was hooked on the Indigo Girls and explored the music of anyone related to them — their influences, those they performed with, and those whose fans overlap.

In the late '90s, Zach De la Roche of Rage Against the Machine and small band of dedicated activists created the Spitfire Tour to provide a space for musicians, actors, and activists to speak out on global affairs. The Indigo Girls were predictably involved with this, and so was drummer Kate Schellenbach. At the time, Schellenbach was a member of the now defunct Luscious Jackson, so I found a copy Fever In Fever Out and gave it a listen.

Within the first few beats of "Naked Eye," I was hooked. For quite some time after that, all I could listen to was Luscious Jackson, and I made it a point to collect the rest of their albums. In doing a bit of research for this article, I discovered that "Naked Eye" was one of their top 40 hits, but I never heard them on the radio, so my relationship to their music had not been influenced by popular opinion. It was an instinctual attraction. 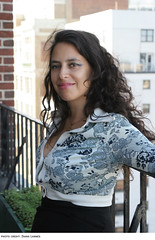 About seven years ago, the band broke up and went their separate ways. Officially calling it a hiatus, there was still some hope that they would eventually reunite. In the mean time, they've moved on to other projects, and recently the band co-founder Gabby Glaser released one such project — her solo album, Gimme Splash.

Glaser has not lost any of the groove and sultry vocals that were part of what drew me and many others to Luscious Jackson, particularly on tracks like "Fruit Is Sweet." The fuzzy bass pounds relentlessly through a non-stop dance floor groove that is heightened by Glaser's rich and low vocals. The mood shifts slightly on the track that follows, " Darling." It still has an element of groove, but it has been brightened into a sun-drenched lazy summer afternoon love song. Just as the listener is fading away into bliss, the album shifts gears again to the more aggressive and aptly titled "Balls Out."

There is continuity in the album through the lush layers of the production and Glaser's exquisite vocals, but the flow, as described above, can occasionally be jarring. However, given the enjoyment the music provides, one can forgive the song order, particularly in the age of random shuffle.

There are a few other notable tracks on Gimme Splash, such as the rockin' "Shakedown" and the bass-driven "Sophisticated Gentlemen," and taken as a whole, it is the perfect album for kicking back in your lawn chair while soaking up the summer sun. Few musicians are able to pull off what it takes to create that atmosphere. Glaser happens to be one of them.