It isn't simple and cannot be wrapped up in an uncomplicated or neat package.

This past June, Frank Black released a two disc follow-up to his 2005 release Honeycomb, which had received critical success. Fast Man Raider Man is a diverse collection of songs from the artist who has been continually growing and evolving since his former band, the Pixies fell away.

The project was recorded in phases over span of two years. The twenty-seven tracks came together in studios in Nashville and Los Angeles, with a wide range of accompanying players including The Band's Levon Helm, Cheap Trick's Tom Petersson, and Heartbreaker drummer Steve Ferrone. Also included on the recording were some of those who worked on Honeycomb including Steve Cropper, Reggie Young, Buddy Miller, Spooner Oldman and Chester Thompson. 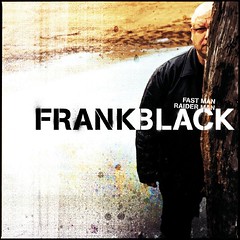 In a recent interview I asked him how he was able to put together such a cohesive sounding album, when there were so many different variables involved. He said, "I didn't worry too much about that. I let the producers worry about it. I just wrote songs and showed up for my sessions. Usually I would book the sessions, too. I would say, 'Hey, I want to record in a couple of months. You want to set something up for me?' I would invite some musicians to come and play with me and I wouldn't worry about cohesiveness."

Though it may have not been a huge concern to him, the end result is something consistent and interconnected. Though the individual pieces vary, they come together to form a puzzle that creates a new image all its own.

The songs have an alt rock, as well as a bit of a country rock, feel and the lyrics can be dark and obscure or uncomplicated and amusing. In all instances they are enjoyable. Fast Man Raider Man doesn't stray too far from what you might expect from Black, which admittedly encompasses quite a range.

Disc One contains some stand outs; one being "Johnny Barleycorn." With its rhythmic classic roots rock sound, it delivers some of those obscure lyrics, which call forth images of a sacrifice or at the very least something darker than the up-tempo beat would imply. In contrast, "Fast Man," the song representing half the title, is a moody ballad but such word play is just what you expect from Black. "Raider Man," the second song credited in the title, is a continuation of that. Another favorite is "I'm Not Dead (I'm in Pittsburg)," which takes the dismal emotion and puts just a bit of a sardonic spin on it.

The tones and moods shift and chase like a blowing breeze, but the overall style follows a steady course that takes you through the many shades that this personality of Charles Thompson encompasses. No, it is not the same style of Black Francis of the Pixies and it is different still from what he produced under the monkier Frank Black and the Catholics. 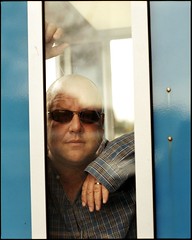 Disc two opens with the up-tempo "In the Time of My Ruin," and from there the ride of changing moods and feels continue. From the highs of the classic sounding "Kiss My Ring" to the lows of the brooding jazzy ballad "My Terrible Ways" he follows through with one vast selection after the other.

It's hard to sum up Fast Man Raider Man. It isn't simple and cannot be wrapped up in an uncomplicated or neat package. It's complex, diverse and includes so many influences and genres. At the end of the day, however, it is good alternative rock, delivered by a main-stay who still has plenty to say, even if it's convoluted and not exactly what it might seem to be on the surface.

This CD was also reviewed by Zach Hoskins of Modern Pea Pod, shortly after its release. More information can be found about Frank Black and Fast Man Raider Man at the album's Myspace Profile. The fan-based website is also a great source of information on Frank Black, this month's featured artist.