Hours of music from the Summer of Love and the generation of peace and love.

Music Review: Flower Power: The Music of the Love Generation

"I can’t remember if I cried
When I read about his widowed bride,
But something touched me deep inside
The day the music died." – Don McLean, "American Pie"

If nothing else rang loud and clear as I listened to the ten discs contained in the Flower Power box set, it was that the music of the sixties and seventies was simply different. The melodies, the harmonies, and the messages were delivered in a way you won't hear when you turn the radio on these days. Don't worry, I'm not going to opine about how corporate owned radio is destroying the music industry. What I am going to do is give you a sneak peek at this classic music from a hipper and cooler generation.

Flower Power: The Music of the Love Generation is a box set containing five themed double discs brought to you by Time Life, the company well known for bringing the listening public genre-based music compilations. The five double CDs are titled Time of the Season, Born to Be Wild, Age of Aquarius, Summer of Love, and Groovin'. Each disc has in the neighborhood of 20 tracks, so what you get with this box is nearly 200 songs from the decade of peace and love by artists too numerous to list in their entirety.

Known as the generation of peace, love, and rock 'n' roll, there are songs protesting war, songs of love, and songs of passion. For someone who came of age in that decade, or even if you’re a little younger but found yourself migrating toward this music like me, this collection will quickly become a treasured possession, and the songs will find themselves in high rotation on your iPod, if for nothing else than the memories you associate with them.

Time Of The Season

This is probably the double-disc collection I've spent the most time listening to since receiving the set. Disc one has such favorites as The Moody Blues' "Nights in White Satin," Lobo's "Don't Expect Me to Be Your Friend," and Aretha Franklin's "Bridge Over Troubled Water." But it's not all about passion. Alice Cooper's "School's Out" and The New Seeker's "I'd Like to Teach the World to Sing" demonstrate the two opposite extremes of '70s rock included here.

Disc two combines the reflective, contemplative sounds of Don McLean's "American Pie" and Jackie DeShannon's "What the World Needs Now is Love," with the protest songs so prevalent at the time such as "We Shall Overcome" by Joan Baez. In between are songs of discontent. Five Man Electrical Band's "Signs" is just one example.

One of the main reasons I've found myself drawn to compilations like this box set is the familiarity. There are no surprises and no filler. Even though not every song in this massive collection rates high with me, I was aware of them enough to know what to expect going in, and the Time of the Season CDs didn't disappoint.

Born To Be Wild

Though I'm not sure if the teenagers of the '60s have a monopoly on discontent and hunger for change, it was the music of this generation that expressed it the loudest. Many of those songs are contained on this two-disc set, 32 of them to be exact. Whether it's Steppenwolf's "Born to Be Wild" or The Mamas & The Papa's "California Dreaming" of disc one, or Barry McGuire's "Eve of Destruction" or The Crazy World Of Arthur Brown's "Fire" of disc two, the songs ring of a hunger and passion for change.

The two CDs bundled under the title Born to be Wild contain the hardest sounding songs, the ones I would label classic rock. They are songs that I remember as ones I latched on to as I was coming of age and trying to identify who I was and who I was becoming.

Or course, you couldn't title a dis Age of Aquarius without including the song. It is probably the song to best reflect the hope for change that came out of this decade of music and appears on disc one. What remains are the songs from the folk side of sixties rock, artists like Janis Joplin, Bob Dylan and The Byrds.

Highlights from disc one include Big Brother & the Holding Company's "Piece of My Heart" (featuring vocals by Janis Joplin), and the Byrds' two biggest hits "Mr Tambourine Man" and "Eight Mile High." Disc two features another hit from The Byrds, "Turn, Turn, Turn" as well as Bob Dylan's "Subterraenean Homesick Blues" and The 5th Dimension's "Aquarius/Let the Sunshine In."

As with many other compilations released this year, Flower Power: The Summer of Love celebrates the thirtieth anniversary of the musical phenomenon. All these songs were playing on the airwaves during the summer of 1967, and there is a wide and varied collection of them in the two disc set. From Van Morrison ("Brown Eyed Girl") to Jefferson Airplane ("Somebody to Love") the collection documents the time that is most often cited as the beginning of the 'hippie movement' and the summer 100,000 people embraced the idea of free love and free drugs in San Francisco's Golden Gate Park. 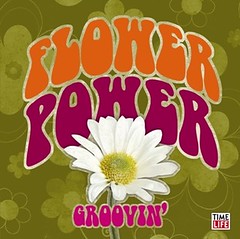 It's pretty obvious a CD set called Groovin' would have its share of dance songs, but they are not the high energy, rock-out dance numbers. Instead the two discs have a mellow vibe, good for slow dancing with that special someone, like on Peter, Paul, and Mary's "Leaving on a Jet Plane" and Sonny and Cher's "I Got You Babe" from disc one. Disc two contains the slow moving Tommy James and the Shondells "Crimson and Clover" and Lobo's "Me and You and A Dog Named Boo."

It's not all about the slow groove, though. There is a selection of mid-tempo tunes, but overall these would be the two mellowest discs in the set.  And as Don McLean sings in "American Pie," "And I know that you're in love with him / cause I saw you dancing in the gym / you both kicked off you shoes / dig those rhythm and blues…"

The music on the Flower Power box set has just that sort of energy. It can pull you to your feet, remind you of the simpler times of youth, or the complicated times of a country trying to escape a war. Comprehensive, it will provide hours and hours of memories and listening pleasure. The Flower Power box set can be purchased at the Time Life website.