As I have listened to Exit Clōv's EP Respond Respond on repeat over the past few weeks, I am frequently reminded of the blissful harmonies created by the Murmurs. Twin sisters Emily and Susan Hsu provide the vocals for Exit Clōv, as well as keyboards and violins. Their voices weave in and out with such a similar tone and approach that it almost sounds like a single person dubbed over in the recording process.

For the most part, this EP rocks the earbuds with great songwriting and playing, but it has one small feature that generally drives me insane in the Age of iPod. The title song is hidden on the end of the last track. Rather than slapping an extra track on the CD that you weren't expecting, they have inserted four minutes of silence after "Communist BBQ" followed by the two minute ditty that reprises elements of "Beast Simone." This is a far too common practice that is sure to annoy those who listen to music on shuffle, causing them to examine their equipment with concern in the deafening silence. 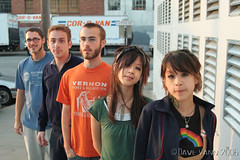 That aside, Respond Respond really is a great collection of songs. "DIY" kicks it off as a driving pop anthem for the indie rocker. The lyrics admonish the hypocrisy of those who talk about creating a supportive music community but in practice exclude those who create music/art outside traditional forms or those who are new to the music scene. The song begins with a driving synth-pop rhythm that carries through with a hint of disco near the end before winding down and leading into the dark and mysterious "Beast Simone." It is in the chorus of "Beast Simone" that I hear a connection with the Murmurs, particularly their song "Mission" off of the 1994 eponymous album.

I realized that I have an insane collection of music and random associations when the opening verse of "Violent Berries" reminded me of "Mama Mia" by Abba. Lyrically, the songs have nothing to do with each other, but the initial music hooks are similar. "Violent Berries" brings the violin playing of the sisters to the fore-front by featuring it throughout the song. The electric guitar, bass, and drums continue to drive the music while the vocals and strings provide the embellishment.

The disco feel is back on the next track, "Moving Gaza," and is somewhat incongruous with the lyrical content, which alludes to the 1982 Israeli invasion of Lebanon. The song also gives a shout-out to fellow DC artist Ris Paul Ric by naming "Purple Blaze" as the protagonist's favorite song. There is an apparent political intent in "Moving Gaza," but it is hazy and not clearly defined. It seems like the songwriter has something to say to the listener, but just when it seems like the point is about to be made, it turns self-referential and obscured.

"MK Ultra" references the CIA mind-control research program from the 1950s and 1960s called Project MKULTRA. The point of view is fashion model and radio show co-host Candy Jones who claimed to have been a victim of the CIA program. The song is able to showcase the psychedelic imagery of someone changed by mind-altering drugs while also poking a sharp stick at the perpetrators in the chorus:

Respond Respond concludes with another politically themed tune, "Communist BBQ," which features the best puns on the EP:

The lyrics are laden with the politics of communism and socialism in the Americas, but delivered in a package that is easy to assimilate. Throughout Respond Respond, Exit Clōv manages to effortlessly combine heavy and thoughtful lyrical commentary with toe-tapping, head-bobbing synth-pop-rock.