This singer-songwriter's latest project pulls together a unique collection of jazz standards, but be prepared for the unexpected.

Erin McKeown is hard to pigeonhole. When she began her career in music, it was her guitar skills that distinguished her from the flocks of folky New England singer-songwriters. In the flood of coffeehouse troubadours, McKeown was able to rise to the surface with what seems like a mixture of skill, planning, and luck. Fate brought her together with fellow Voices on the Verge members, and it was then that enough national attention was drawn to McKeown that she was able to launch a succession of highly lauded albums on major independent labels (Signature, Nettwerk). Her fifth album, Sing You Sinners, was released this week, and if listeners expect more along the lines of the last three, then they will not be disappointed.

McKeown is still exploring her love of the style of pop/jazz standards from the 1930s-50s, but this time around she's covering the work of songwriters from those eras, rather than writing her own compositions. 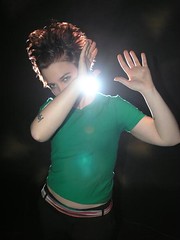 With the exception of one song ("Melody") all of the tracks on Sing You Sinners are covers, but even that one song blends in so well that one would never know it was a McKeown original unless the liner notes were consulted. Even though these are not her songs, McKeown and her band have created an album that is just as unique and fresh as her previous ones. Yes, it is a collection of standards, but there are still plenty of surprises.

The liner notes of Sing You Sinners includes an interview with WFUV Music Director Rita Houston. In that interview, McKeown says that Judy Garland was her window into this style of music, and no standards project would be complete without her. Thus, it is appropriate that the album would begin with "Get Happy." For the unaware such as myself, the opening piano flourishes leading into a very gospel tune is not what one expects to hear on an Erin McKeown album, but soon the song shifts into the sunny/bouncy style that longtime listeners have grown accustomed to.

Two of the most entertaining songs on the album are Dietz & Schwartz's "Rhode Island Is Famous For You" and Evans & Livingston's "I Was A Little Too Lonely (You Were A Little Too Late)." Both have just the right touch of camp and clever lyrics to fit McKeown's sense of humor and delivery. The former is a fan favorite and is requested frequently at her live performances. Given the added layer of Rhode Island being McKeown's home residence, one can understand why she would be drawn to the song in the first place.

Sing You Sinners was recorded live in four days and retains the energy and spontaneity that this type of recording process can create while at the same time maintaining the production quality listeners have come to expect from McKeown. This is also her first project as a solo producer, and it seems she has learned well from mentor Dave Chalfant, although it remains to be seen if she can be as democratic and even-handed with an album of her own material. Regardless of what is to come, McKeown continues to prove that she can create high-caliber music and find the right people to help her get it out there.