Because that emotion is laid out so clear and crisp, this album truly does resonate with the listener.

The latest release by Eric Himan, Resonate is an album that doesn't stray too far from the bluesy folk rock I've come to expect. At the same time, the artistic growth displayed on these tracks left me awestruck. The sound has developed and grown in leaps and bounds since my first encounter with his music.

In August of 2005 I was first introduced to Eric Himan while he was promoting his release Darkhorse. Even though I was there for the main act, he quickly won me over with his engaging personality and his singer/songwriter, acoustic approach to his music. I was so impressed; I picked up that current CD before heading home that night.

In October of 2006, with the release of his Everywhere All at Once, Eric Himan was one of BC Music's Featured Artists. So, when his newest release, Resonate, hit my desk a couple weeks ago, I was anxious to hear what the album had to offer. 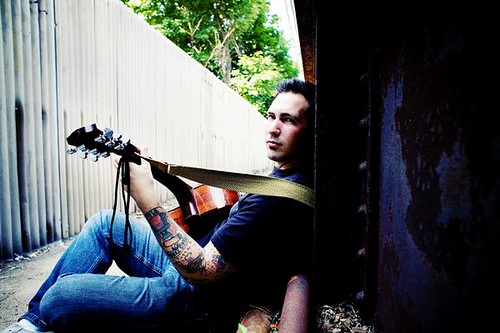 From the opening notes of "Wish You Would,", the album's opening track, I felt as if I was sitting down with an old friend. The airy acoustic accompaniment supporting his distinctive voice delivered the spun tale of love lost. As the verse gives way to the chorus, the sound swells and fills in, demonstrating that growth I referred to earlier. What is an aural delight in the opening arrangement is only enhanced by the added background instrumentation.

In similar veins are the tracks "Open the Door" and "Only." Both are love song, but each from a different perspective. According to the liner notes, "Open the Door" was written for his sister. Below the contagious melody that hooks the listener are the lyrics of moving beyond the past and rebuilding a relationship. In contrast, "Only" seems to be about the moment and what's to come in a blooming romance. All three songs are examples of a great tale-teller at work. Not quite ballads -– the songs are a hybrid cross of indie, folk, and blues drawing from the best of all three genres. But that is only half of the sound included on this, or any of his previous albums.

If you want the true traditional ballad he's proven he can do so well in previous releases, it's here too in the form of "He's Using You." The sentiment of the song is obvious from the title, and his emotive delivery is backed with a beautiful arrangement, befitting his smooth voice. The song also showcases his range, and is a definite highlight of the album.

"For Me," "In Demand," and "Protest Song" pick up the tempo and the energy, but the messages are still there. All three give you a glimpse at what exists inside Himan. Whether he's shining the light on the obsession with celebrities and their downward spiral ("For Me"), the drive for success ("In Demand"), or his personal feeling on this nations' military policies and actions ("Protest Song"), there is nothing obscure or abstract. And it's because that emotion is laid out so clear and crisp that this album truly does resonate with the listener.

Resonate is available from all the usual online outlets, including iTunes. You can also pick the CD up at one of Himan's many live performances. His tour schedule, as well as clips to songs from Resonate and previous releases can be found on his MySpace page and his official website.