Music Review: Eric Himan – Everywhere All At Once

Everywhere All at Once, the newest release from Eric Himan, is a culmination of everything he is and all the styles and genres he ventures into. Best recognized as a folk singer-songwriter, he can rock out, and blues influences run rampant through the album. At the heart of his unique style is Himan himself and the soul of his music is the songs he sings – stories of his life – which are seeds of the human experience.

“Where I’m Going” is a look at his past and future. Raised in a military family and now traveling constantly to promote his music, he sings, “Sister and I lived on the fly/ daddy got his orders/ Time to say goodbye/.” A folk blues piece, it’s heavy on acoustic guitar and has strong rhythm lines. While the song is a pretty accurate description of the young singer’s lifestyle, it by no means defines the album. In the same musical vein is “The Difference.” A song he is said to have written after falling in love for the first time, it beautifully describes the wonderment and joy that can come from knowing that one special person sees something in you that no one else does. 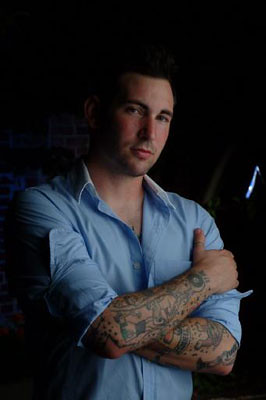 The sound switches up with “Something to Dance To.” With a steady danceable rhythm melded with an unexpected acoustic guitar, the song is a hybrid of a country-rock ballad and a dance club hit. Sounds odd, but it works. The lyrics sing of dancing away a day “that went so wrong,” and with the infectious back beat, sitting still is just impossible. In a recent interview Eric said of the song, ” I wanted something upbeat, something fun, you know. And then in my own way, I wanted to do something very acoustic and very bare-bone. It was just such a fun idea to bring an acoustic guitar into a dance scenario.”

Staying with that same acoustic rock-folk influenced tone is “Love Don’t Hide.” It has that same danceable feel that “Something to Dance To,” does, but the lyrics dig deeper. “Love shouldn’t have to hide/ Love should make you want to tell everybody,” is the heartfelt message that is at the core of the song. But just as soon as you get used to that sound, it changes up again musically — though those deep slice-of life messages are still ever present.

“What I Can Give,” is a short, heartfelt, soulful ballad Himan wrote for his partner’s mother who found herself fighting breast cancer for the second time. Opening with a simple melody on guitar, followed by the lyrics, “I wish I had a song to sing for you…” the importance and depth of the song is not lost on the listener for even a second. About the song, Eric said in that same interview, “I really wanted to give something to her, say something. But not something cheap like, ‘Oh things are going to get better,’ or ‘I’m just so sorry for you,’ lots of tears. So I said, ‘You know, all I know to do is make you a song. This is what I can give. It may not be this and it may not be that but I just want you to know you mean a lot to me because you touch me in some way.'”

And the styles just keep changing. “Heart Clean” rocks it hard and is a bit of a follow-up to “One Night Stands” from the album of the same name, reinforcing his dedication to staying true to himself. “I Don’t Wait Well,” has a power pop feel and musically translates the attention-deficit attitude of the lyrics. But no matter the genre of the song, Eric Himan sings songs that are true to the human spirit and are slices of his life. The album would be a welcome addition to your collection. Tracks from Everywhere All At Once can be heard at Eric’s MySpace Profile Page. News and tour information can be found at his official website.

Check out the video below to hear clips from Everywhere All At Once and get a sneak peak at his life on the road.

Everywhere All At Once
Add to My Profile | More Videos